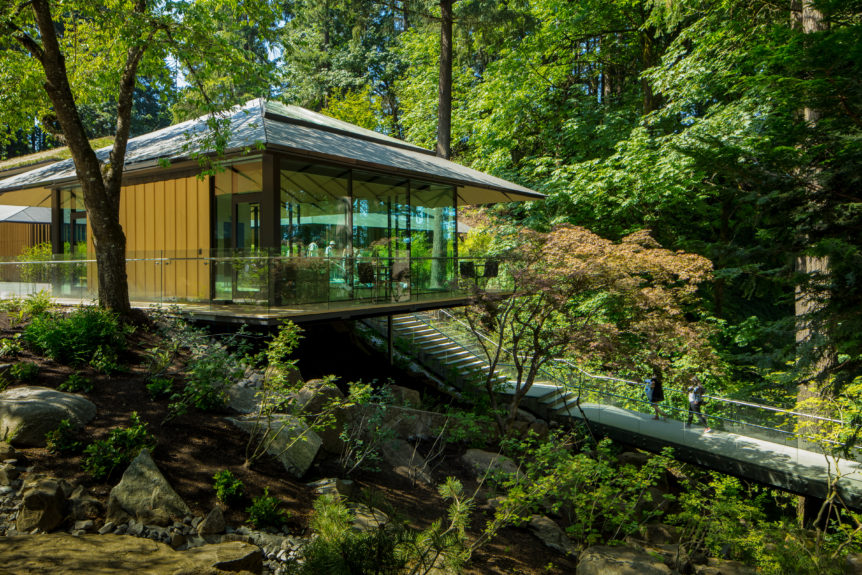 For me, a foretaste of the evocative new architecture at the Portland Japanese Garden came two years ago during the rice harvest season in a hamlet on the west coast of Japan. Old houses with flower gardens and a small Shinto shrine formed a circle around vast rice paddies and gurgling channels of water. Here and there stood bamboo racks holding drying sheaves. Next door to the guest house where two friends and I had unrolled our futons stood a small, rectangular community center with a thatched roof crested by a ridge board. Its walls were formed by wooden slats sandwiching a double layer of waterproof washi paper, handmade locally.

This elegant, simple building, completed in 2000, was designed by the architect Kengo Kuma. In the years since, Kuma has moved on to such grand projects as the new National Stadium in Tokyo and the Victoria and Albert Museum’s outpost in Dundee, Scotland. But then as now, the keynote of his work has been a contemporary reinterpretation of timeless and traditional Japanese building forms. Discovering that rural gem whetted my visual appetite for last spring’s opening in Oregon, when the Portland garden unveiled Kuma’s first publicly commissioned project in North America: a harmonious cluster of three buildings—including an exhibition hall and a teahouse, collectively known as the “Cultural Village”—that are sleek and modern, yet with the scale, massing, and warmth of those in a small Japanese town. 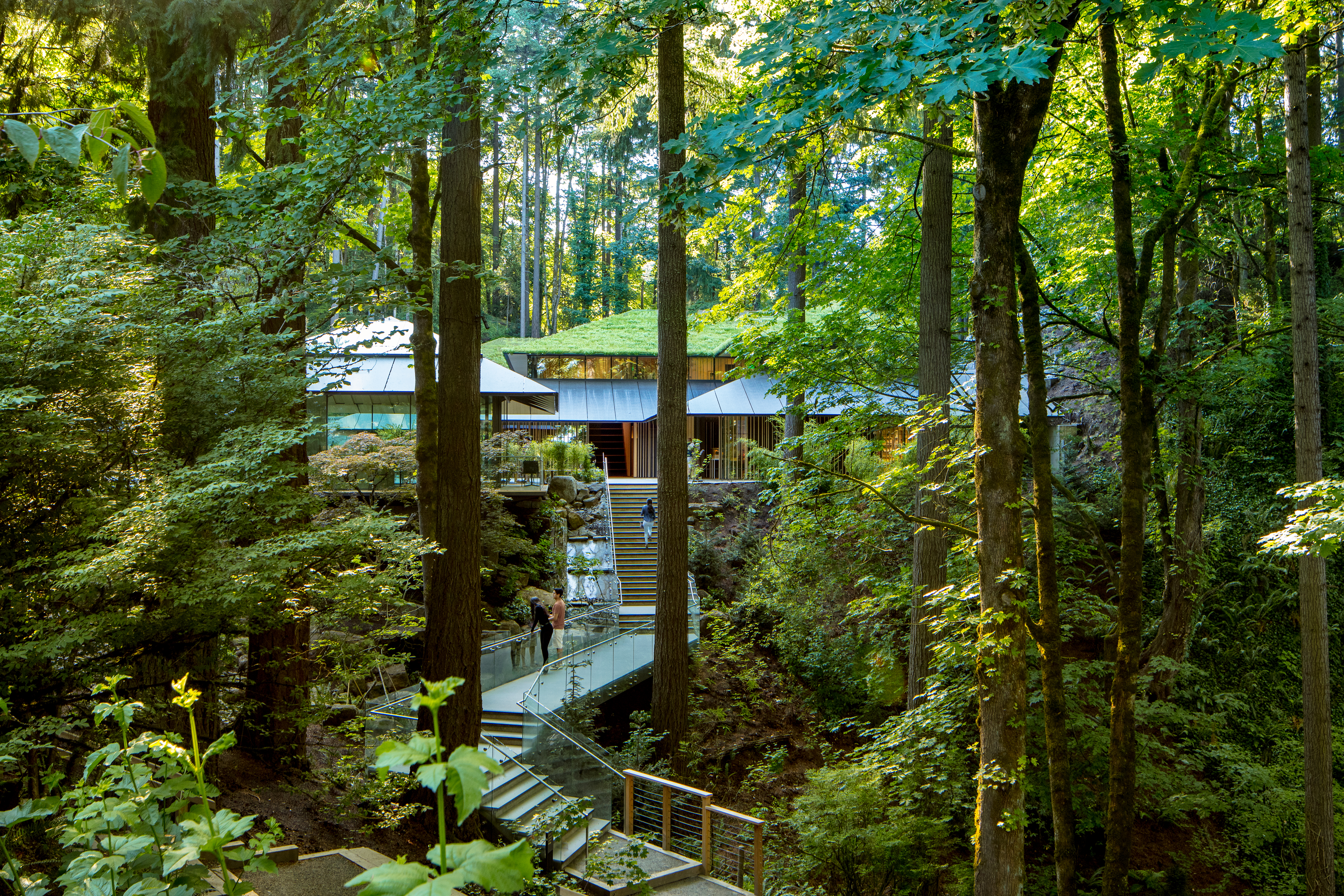 Since its founding in 1963, the Portland Japanese Garden has maintained a special relationship with Japan. Lumber from Oregon forests was exported to rebuild the country during the postwar years, and many Japanese corporations have maintained a presence in Portland. Nestled in the rolling West Hills neighborhood of the city, the twelve-and-a-half-acre garden features serene, manicured spaces, a dramatic waterfall and pond garden, a raked sand and stone garden, as well as a moon bridge and a traditional zigzag plank bridge weaving through beds of Japanese iris.

Surrounding it all is a towering curtain of mainly Douglas firs, the borrowed landscape of the Pacific Northwest. In the distance, a view of snowcapped Mount Hood conveys the spirit of Mount Fuji. But more than a bucolic respite, the Portland Japanese Garden, under its CEO Stephen D. Bloom, has become one of the country’s premiere institutions displaying and teaching the culture and arts of Japan. Shows and events could formerly only be held in a pavilion located in the depths of the garden. But in 2007, a decision was made to create a new complex for the PJG’s cultural activities and public services on the periphery of the grounds. In 2010, Kuma was hired. 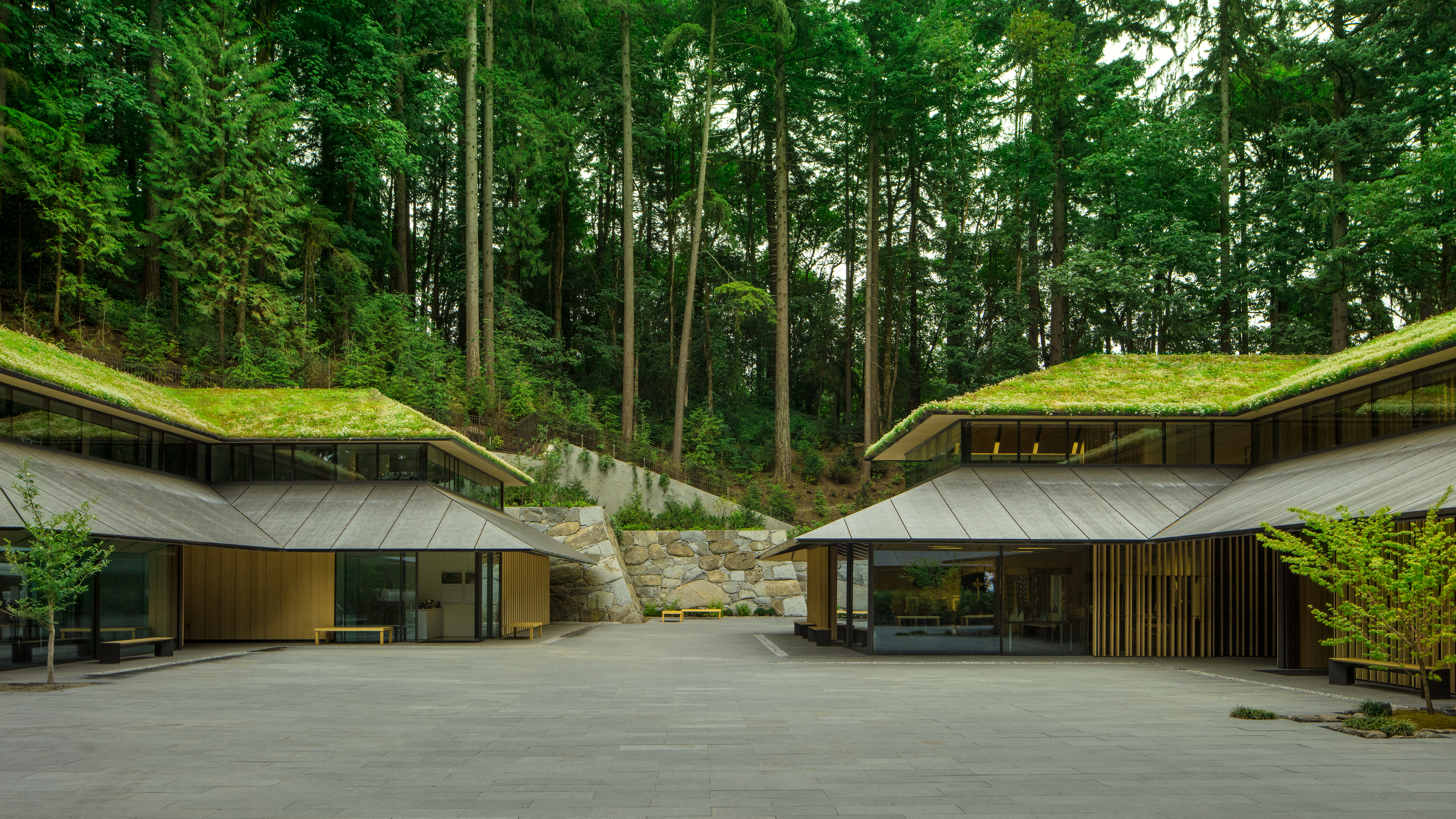 The Tateuchi Courtyard with the Jordan Schnitzer Japanese Arts Learning Center at right and the Garden House at left. In the rear stands the 18 ½-foot-high castle wall. Florio photograph.

Today, at its new entrance in Washington Park, visitors are greeted by shallow waterfalls rippling over stone steps into pools. Ahead, a steep uphill pathway curves through woodlands—providing the quiet, contemplative moments that are integral to an approaching Japanese garden. Glass balustrades with stainless steel rails lining the path and stairways allow for views of the hillside landscape of scattered boulders and shrubs with trillium, Oregon grape, and other plantings behind bamboo wattling.

But then you see, dramatically cantilevered over, as if floating above this landscape, a corner of the magical glass-walled Umami Café, the first building of the three in the Cultural Village. In teahouses of old, without electricity, a soft light would penetrate through washi or rice paper. But here, in one example of Kuma’s ingenious use of industrial materials, to illuminate the interior he inserted a triangular skylight covered in Tyvek, a construction lining material with the texture and appearance of washi paper. The teahouse facade faces the other two buildings set around the Tateuchi Courtyard, which is paved with black granite. A Yoshino cherry tree at the edge of the courtyard was coming into bloom in time for the opening.

In adapting the Japanese aesthetic, along with local materials and craftsmanship, to what he calls the spirit and nature of Portland, Kuma introduced the striking feature of double rooftops, as in old villages, for both the Garden House and the Jordan Schnitzer Japanese Arts Learning Center, the largest of the three buildings. The buildings are airy with wood-slat exteriors over glass, a signature Kuma design element that, like brisesoleils, regulate the play of light and shadow in the interiors. Kuma believes this effect is the basis of Japanese architecture, as expressed in Jun’ichirō Tanizaki’s seminal essay, In Praise of Shadows: “the beauty of a Japanese room depends on a variation of shadows, heavy shadows against light shadows—it has nothing else.” At night when the buildings are illuminated, they appear like double lanterns with vertical slits on their sides. In other Kuma buildings, I could always discern patterns in his spacing of wooden and bamboo slats, but in Portland I was unable to detect any such regularity. When asked about this randomness, he responded: “Look outside. Do the trees in the forest have a pattern?” I got the point. 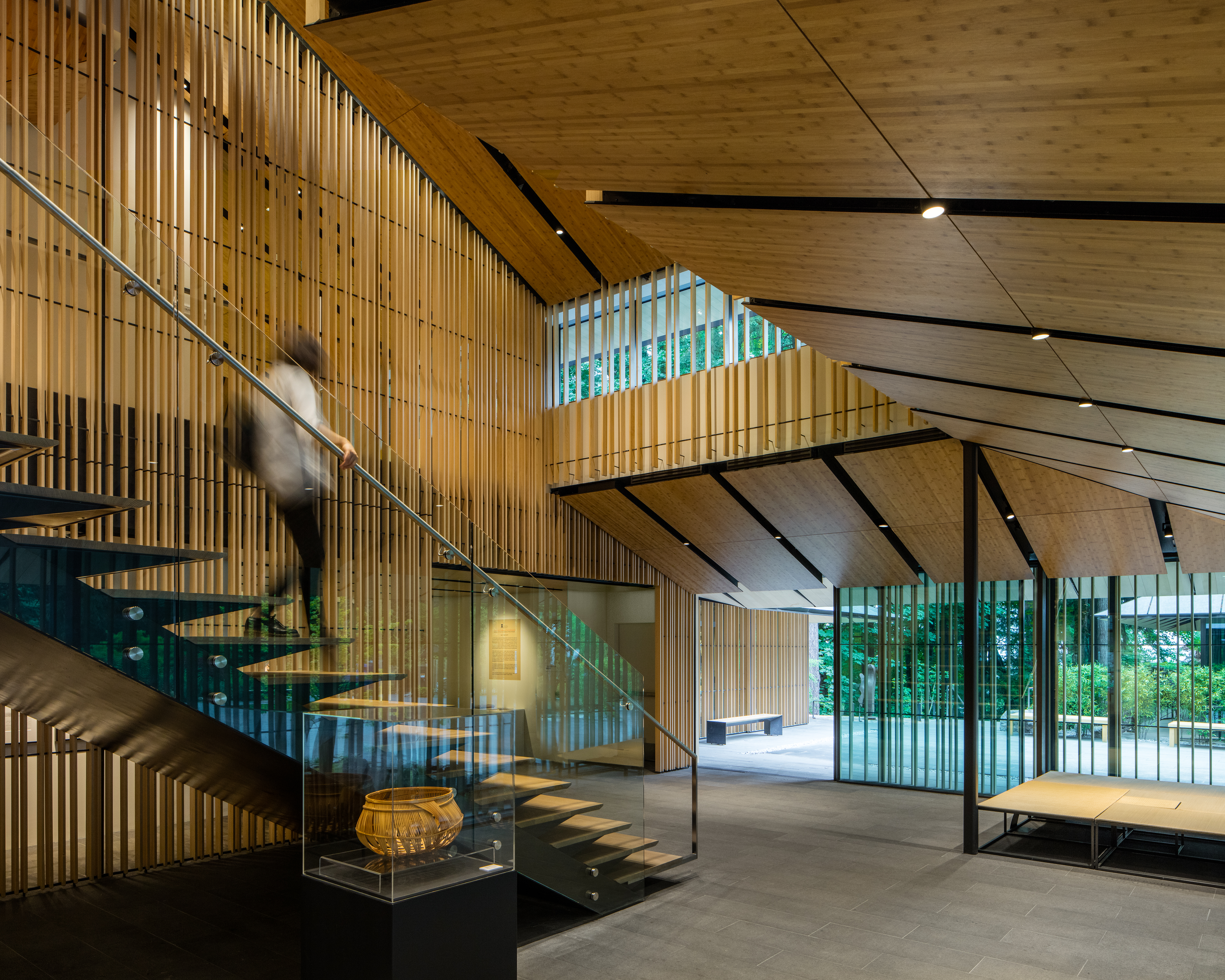 Kuma was particularly pleased that the local wood, Port Orford cedar, had many of the same qualities as Japanese hinoki, including a fragrance. In another environmentally sensitive touch that is also an aesthetic nod to thatching, Kuma clad the upper roofs in living material: thousands of tiles covered in ten different kinds of sedum. The plants absorb water, turn an attractive red in autumn, and resist frost in winter. When it rains, as it does often in Portland, water slithers down the lower, aluminum roofs, draining into a trough of river stones. In combination, the sharp-edged roofs and the slender slats give an elegant thinness and transparency to the structures.

Several new landscape features—among them the water garden at the entrance, the hillside plantings, and the Ellie M. Hill Bonsai Terrace—were designed under the aegis of the garden’s curator, Sadafumi Ushiyama, a third-generation Japanese gardener. Suminori Awata, a fifteenth-generation Japanese master stonemason, oversaw the building of a mammoth 18 1/2-foot-high, 185-foot-long medieval castle-style wall constructed as a retaining wall behind the village. It consists of five hundred tons of Baker Blue granite boulders, selected from an Oregon quarry, that were split by hand with traditional tools. 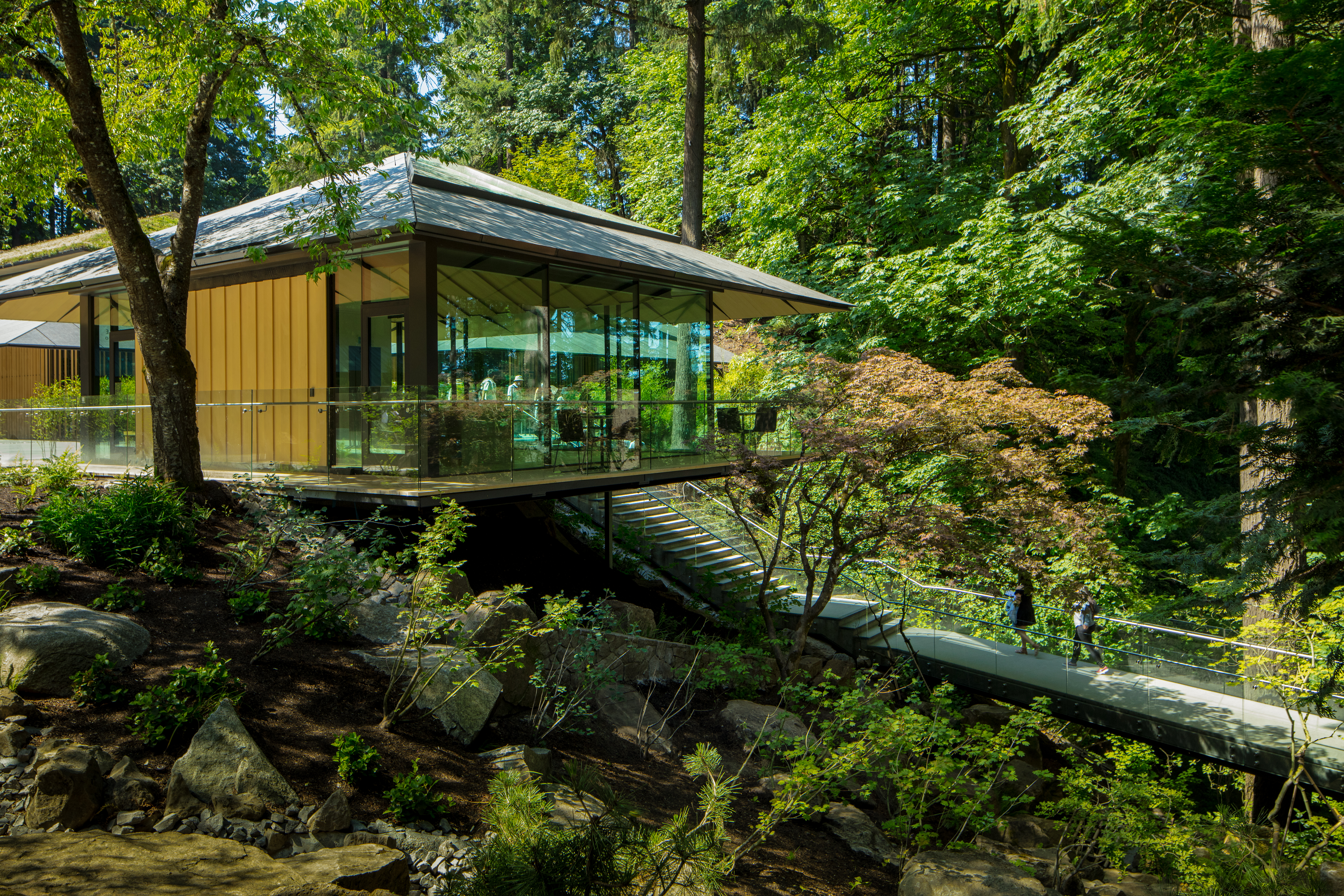 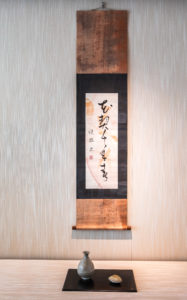 A tableau by Hosokawa Morihiro, complete with flower vase, incense container, and a scroll inscribed with a quotation from Zen poet Lin Hejing. Photograph by Jonathan Ley.

As soon as it was completed, the Cultural Village took on a life of its own. Horticultural workshops are staged in the Garden House, which includes office and garden equipment storage space. The two-story Learning Center flows around a grand wood staircase with glass balustrades that also serves as seating during music and dance performances on the lower level. Upstairs, in addition to an office suite is the Vollum Library, which features a Mira Nakashima–designed worktable and a collection of two thousand publications focused on Japanese gardening and arts. Below, along with a classroom and gift shop, there is an exhibition gallery with walls lined with vitrines.

This gallery is a secluded, contemplative space that was especially appropriate for the opening exhibition, Hosokawa Morihiro: The Art of Life, A Rebirth in Clay. Morihiro served as prime minister of Japan from 1993 to 1994. After leaving office, he apprenticed himself to a master potter. (His first job was sweeping floors.) The Portland exhibit featured Morihiro’s rustic tea ceremony pottery paired with his hanging calligraphy scrolls. As I walked along looking in the showcases, my eye was caught by one tableau: a flower vase with smoky markings from the kiln, a small incense container, and, inked onto a scroll with a wide brush, lines from the poem “New Year’s Tea” by the twelfth-century poet Fujiwara Shunzei:

Undoubtedly this new Cultural Village will serve, like the garden beyond, as a welcome refuge from stressful times.