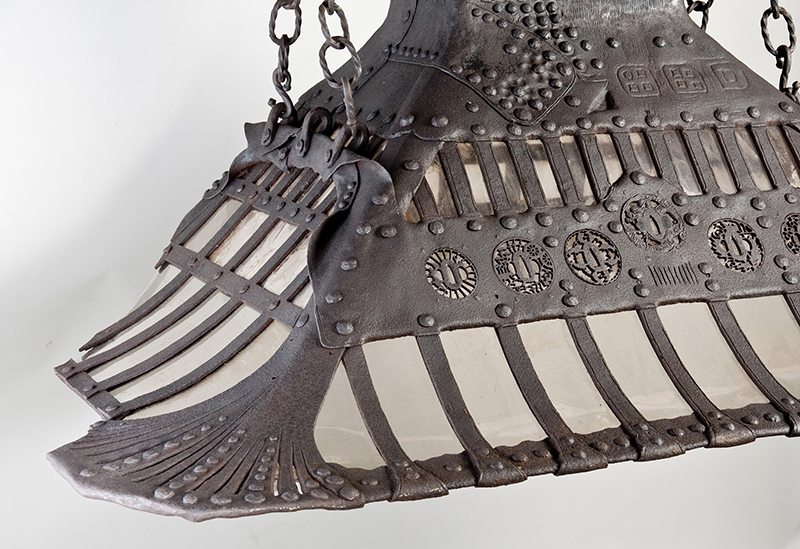 Last week, the Morse Museum added a permanent installation in their galleries: a unique Louis Comfort Tiffany-designed cast-iron fireplace hood, which was made for his own New York City residence in 1883. This new exhibition Tiffany’s Fireplace Hood features the enormous device in all of its glory, showcasing the cast-iron details including the twenty-two Japanese sword guards that decorate the surface. Before you make your trip over to the Morse Museum, make sure to check here in order to plan your trip in advance.

This fall, the Detroit Institute of Art is hosting an off-site exhibition entitled Visions of American Life: Selections from the Nancy and Sean Cotton Collection of American Art. This exhibition features forty paintings made between 1850—1940 that showcase American artists. These paintings focus on figures representative of American culture, giving museumgoers a greater picture of the breadth of American identity. When you’re making plans to see this traveling exhibition, check here in order to see which gallery the exhibition is residing.

On November 15, the Philadelphia Museum of Art is bidding adieu to their exhibition A Collector’s Vision: Highlights from the Dietrich American Foundation. The loan exhibition features pieces from the collection of lifelong American art collector H. Richard Dietrich Jr., who gathered a selection of rare eighteenth and nineteenth-century American art includes silver from colonial Philadelphia and a teapot made by Paul Revere. As you’re thinking about making a trip to the Philadelphia Museum of Art, make sure that you’re planning your trip in advance here. If you’re looking to learn some more before – or after – you go, you can learn a bit more about the exhibition with us.

This fall at the Nelson-Atkins Museum of Art, they’re hosting several new exhibitions, and one of our favorites is Robert Blackburn and Modern American Printmaking. Master printmaker Robert Blackburn is regarded as one of the most influential American printmakers. His sixty-year-long career yielded many advances in the art and science of printmaking, as he ushered in a new wave of printmakers who produced unique works. When you’re planning your trip to the Nelson-Atkins Museum, make sure you do so in advance and check here to reserve your timed tickets.

After reopening just two weeks ago, the Phillips Collection brought with it a stunning exhibition on loan from the Whitney Museum of American Art entitled Hopper in Paris. This exhibition focuses on the lesser-known period of Edward Hopper’s career that he spent living in Paris in the first decade of the 20th century. The show features oft-overlooked scenes of the city at peace and is comprised of 11 works painted by Hopper between 1906—1910. Those works offer clear signs that his time in Paris greatly influenced the way in which Hopper depicted American life and culture. In order to reserve your timed tickets in advance, make sure to check here, and don’t forget, tickets are free through November 1.

After reopening earlier this fall, the Smithsonian American Art Museum brought with it the exhibition Alexander von Humboldt and the United States: Art, Nature, and Culture. The preeminent naturalist of the nineteenth century, Humboldt spent four years touring South America and Mexico and in 1804 came to the United States. His books and lectures shaped the way nature was viewed here and around the world, by illuminating the manner in which humanity and nature coexist. Humboldt’s work was particularly influential among American artists such as Frederic Church, and this exhibition places American art squarely within the bounds of Humboldt’s dialogue on the natural world. With more than one hundred pieces on view, this exhibition is a must-see whether that be in person or online. If you plan on making the trip to Washington, DC, check here in order to reserve your free timed ticket in advance and here to learn a bit more about the exhibition before you go.