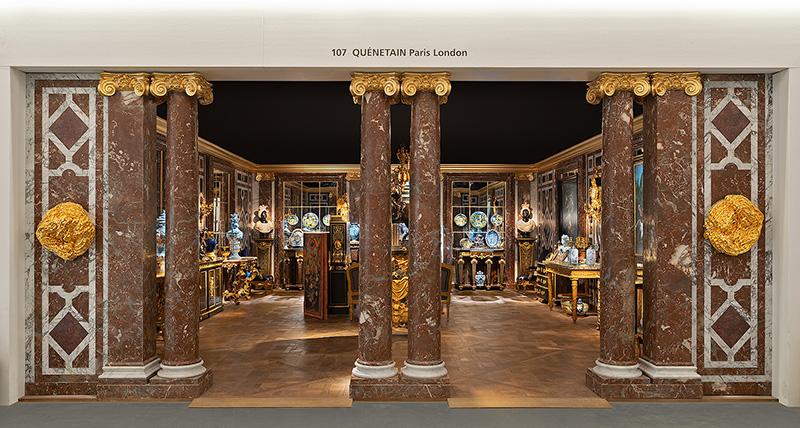 The European Fine Art Fair (TEFAF) in Maastricht, the Netherlands, which opened on Saturday, is closing early after an exhibitor tested positive for coronavirus. Last week, art historian Brian Allen made his way through the fair, and picked out a few of his favorite things.

A La Vieille Russie, the preeminent dealer in Fabergé and the best antique jewelry and Russian art, has a sublime diamond openwork bracelet set with cushion-cut diamonds in silver and gold. It’s French, from about 1870, bedizened with about forty-eight carats of diamonds. At $125,000, it’s a gorgeous, unusual piece.

When it comes to “wall power,” nothing beats Hendrick ter Brugghen’s (1588–1629) big, brilliant Crucifixion from 1624–1625. Ter Brugghen was the greatest of the Dutch Caravaggisti, living and studying in Rome during Caravaggio’s prime. The Crucifixion is an amalgam. Its heavy use of brown tones and its directness are Dutch, while the bloodied, corporeal, and credibly dead Jesus reflect the artist’s exposure to the Roman avant-garde. Jesus is flanked by his mother, Mary, and St. John the Baptist. The picture was in a small northern Italian chapel until 1970, and has never been exhibited in public. It’s not a picture for a private collection unless the collector is very discerning. It’s too visceral. A museum is more likely to buy it. The asking price is $5.9 million.

Visitors come to the art fair at Maastricht to see what I call “fresh meat”: great art that’s been tucked away in someone’s private collection for hundreds of years. Alan Ramsay’s (1713–1784) 1747 portrait of the Fourth Earl of Loudoun in just such a work. Loudoun (1705–1782) played an important role in quelling the Jacobite Rebellion in 1745. As a British army officer, he was exempt from the ban on Highland dress, and took advantage of the privilege by wearing his family tartan, depicted here. Later, he commanded British forces in America during the French and Indian War. The portrait had been in the earl’s family since it was painted. It’s $1.1 million.

Robert Aronson, based in Amsterdam, is one of the greatest dealers in Delftware. This bowl, dating to around 1705, has an extraordinarily rare black colored glaze. Its maker, De Metaale Pot, was one of a handful of factories in Delft whose technicians were skilled enough to force manganese oxide—the compound used to obtain the black surface—to play nice with the pot’s array of other colors. It’s packed with striking and elegant chinoiserie decoration, made dramatic and exotic by the lustrous black background, and priced at $143,030.

This life-size painting, St. John the Baptist Preaching, by Guido Reni, dates to 1635. The saint looks like he was caught in mid-sentence, and is possessed of a passion that belies his youth.  The specificity of the face indicates it was probably drawn from life. Reni must have selected his model carefully, seeking a toned body and decidedly great hair. The painting has an impressive provenance. Joshua Reynolds owned it in the 1770s and ’80s, selling it to the Ninth Viscount of Irvine, who’d hired Capability Brown to grade one of the great British country house landscapes, the grounds of his Temple Newsam estate. The picture descended to the First Earl Halifax, Neville Chamberlain’s foreign secretary during the Sudetenland crisis in 1938, and it remained in Halifax’s family until today.

This bronze Greek helmet dates from 550–500 BC. It’s pierced with four pairs of holes at the sides and two more at the top for attaching a transverse horsehair crest, signifying its owner was a general. The distinctive form of the helmet is found in hundreds of Greek sculptures from the period, including the Parthenon frieze and pediment sculpture. Beaten from a single piece of bronze, after two millennia of oxidation the helmet’s original luster has given way to an amazing sea green patina. London dealer Charles Ede is offering it at $389,041.

Christophe de Quenetain, who specializes in European decorative arts from the seventeenth through nineteenth centuries, certainly has the most impressive booth, decorated with custom-built walls and columns inspired by the Grand Trianon at Versailles. It’s a splendid, evocative space, beautifully lit, with a great display of Louis XIV furniture and majolica.

Danny Katz has two beautiful, small marble busts, one of Enlightenment scientist George-Louis Leclerc, the Comte de Buffon (1707–1788), and the other of Jean-Jacques Rousseau (1712–1778) by Jean Antoine Houdon (1741–1828). They’re in perfect condition (which fact dovetails neatly with Rousseau’s belief in the perfectibility of mankind) and date to 1788 and 1789, respectively—that is, the period when the guillotine was getting up and running. It’s $3.4 million for the pair, the busts having been together since “birth.”

TEFAF doesn’t focus on American art but if you have time to sniff around some great things can be found. William Merritt Chase’s (1849–1916) pastel Untitled (Young Girl on an Ocean Steamer) of about 1883 is an early masterpiece from the American pastel movement that started in the 1880s and embraced the likes of Mary Cassatt, Robert Blum, and Edwin Blashfield. The picture’s palette of pinks, ivory, and touches of green and yellow augment the reverie the subject is enjoying. It’s priced in the low- to mid-seven figures, and is being offered by David Tunick, one of America’s best dealers in works on paper.

Galerie Jean-Christophe Charbonnier is offering a seventeenth century Japanese suit of iron armor entirely lacquered in silver with silk and leather trimmings. Silver lacquered armor was exceptionally rare in Japan and usually reserved for the highest ranking military figures. This suit, sold at the fair’s private preview, is the only one of its kind outside Japan. $572,120.

Alex Katz (1927–) is ninety-three now and still working. He became famous in the 1960s through his large-scale paintings of groups of New York intellectuals but is adept in collages, cutouts, small portraits, and landscapes. His distinctive style is much loved in Germany, where he’s had dozens of shows. Leigh from 2007 is an arresting painting. The figure has a movie-star face: beautiful, to be sure, but blank enough to invite viewers to project their fantasies onto her. Its strongly vertical scale is unusual. The asking price is $972,604.

Galerie Roebbig in Munich has a splendid Meissen tea service from about 1725, which is being sold with its original leather traveling case. The decoration of the porcelain is by Christian Friedrich Herold (1700–1779), with silver mounts from the workshop of Elias Adam (c. 1669–1745) in Augsburg. Through centuries of turmoil in Europe, it’s even kept its teaspoons. It’s $778,083.

H. Blairman and Sons has designed a portion of its booth to recognize the two hundredth anniversary of the coronation of George IV, known as the Prince Regent for his stewardship of the British throne during the long goodbye of George III, his father. Among the Regency furniture on view is a cabinet-on-stand from 1810, probably designed by George Oakley (active 1808–1810) and made from ebony, ebonized mahogany, and fruitwood with Japanese lacquer, embellished with ormolu mounts and a black marble top. It was purchased by the Second Marquess of Bath and is still in the family. It’s priced at $163,901.

This small painting by Vincent van Gogh (1853–1890) dates to 1886, and it marks the point when van Gogh was truly becoming van Gogh. Before that year, he’d painted in a broadly impressionist style, but afterwards his paint surfaces thicken and grow more gnarled and expressive and his subjects change from rural laborers to Parisian cafes, parks, and boulevards. The painting was recently discovered in a private home. A stupendous find, it’s priced in the very low seven figures.

TEFAF is an international fair but it’s also the most important yearly event in the Dutch art world, which leaves native dealers anxious to put their very best foot forward. Jan Abrahamsz Beertraten’s (1622–1666) fantastic Winter Landscape with Skaters from 1662 is the quintessential Dutch skating scene. Snow has settled on every peak of the capriccio castle, giving the scene plenty of dazzle, and a frozen moat forms the stage for a range of winter romps. A dark sky promises even more precipitation. Beerstraten specialized in these scenes. In the same family collection for two hundred years, the painting is priced at $257,454, not a bad deal for a picture with presence, and is on offer from Amsterdam’s Kunsthandel P. De Boer.

Peter Finer is an arms dealer with style. Based in London, the gallery sells exceptional arms and armor from Bronze Age daggers to superbly crafted and decorated modern guns. This unusually large field armor set was made around 1550 for the Duke of Brunswick-Wolfenbuttel. It’s engraved with characters and scenes from the Bible, among them a David and Goliath and Daniel in the lion’s den, as well as Greek and Roman mythology. It was made for pageants but could have protected its wearer from most hazards: it’s constructed from fifty-five pounds of steel.

Giovanni Paolo Panini (1691–1765) was one of Rome’s great scene painters, supplying Grand Tourists with depictions of popular Roman monuments. This view of the Pantheon interior,  offered by Simon Dickinson, dates to 1734 and is Panini at his best. Panini adroitly manipulated the perspective to depict a wider interior view than is actually visible from any vantage point. The surface is fresh, and, at forty-eight by thirty-four inches, the picture is big enough to make you feel as if you’re actually standing in that august rotunda. It’s from the Asbjorn Lunde Foundation, named for the great New York collector. The foundation doesn’t want the price published but it’s consistent with other great Paninis recently sold.

Stair Sainty is offering the truly majestic Portrait of King Charles X in Coronation Robes by Francois Gerard (1770–1837), and credibly touting it as “the last grand portrait of a French king.” Charles (1757–1836) represented the ultra-royalist faction of the Bourbon family. He believed in the divine right of kings to rule and aimed to restore the splendors of the court of Louis XV. The portrait, painted in 1825, commemorated his ascension to the throne a year earlier. Charles presented it to General Talleyrand, whose family had kept it until now. It’s offered at $2.5 million. At 105 by 72 inches, it’s an extravagant, glittering thing.

The best dealers sell things but they’re also connoisseurs. Stephen Ongpin, a London specialist in works on paper, always has a gorgeous, intellectually challenging booth filled with unusual things. This year, he’s brought a museum-worthy selection of thirty-eight drawings by the great German painter Adolph Menzel (1815–1905). Menzel did history paintings, royal portraits, and scenes of everyday life but he was a superb draftsman as well. Head of a Bearded Man is among his most compelling works. It’s done in gouache and pastel and glitters like snow. He scrapped and rubbed the materials to give the figure more volume. Finished in 1861, it remained in the collection of Menzel’s sister and her family until 1940. It’s offered at $131,587.

This is an unusual Schiele (1890–1918) nude. Showing only a man’s torso, and making him as fleshless as possible, Schiele sketches a riveting study in line and color. The palette of green, salmon pink, and shades of blue and brown is unexpected, as is the dominance of negative space. Heavy pencil lines denote contours and details like the figure’s hairy legs, while passages of mottled watercolor help create depth. Even for Schiele, who liked to taunt viewers with his explicit subjects but also with mystery, it’s opaque, one of the most abstract watercolors he ever produced. Dead at twenty-eight, one can’t help wondering, Where would he have gone? Wienerroither and Kohlbacker, the Vienna specialist in work by Schiele and Klimt, are asking almost $2.9 million.

This story has been updated to incorporate breaking news coming out of Maastricht.