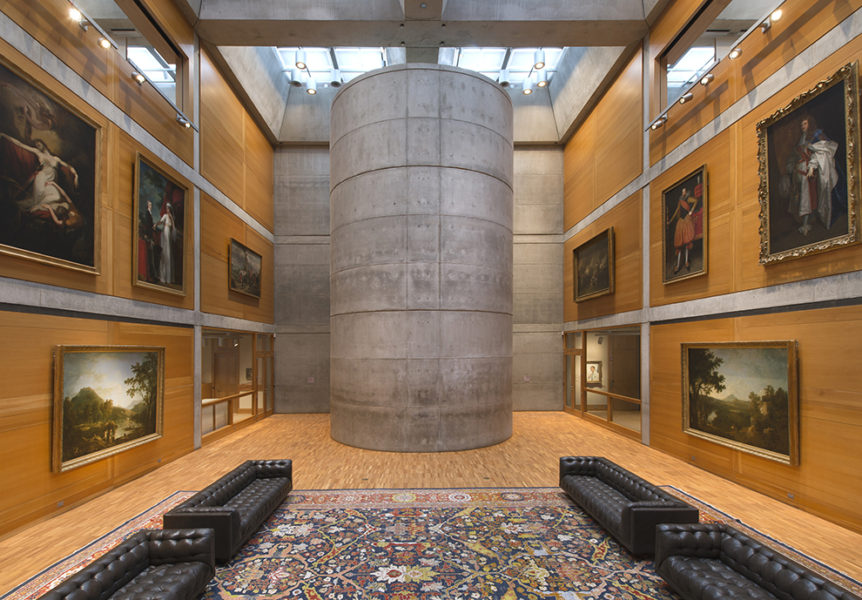 The Library Court of the Yale Center for British Art, following its recent reinstallation. Photograph by Richard Caspole.

Traditional architecture can age gracefully but nothing is more dispiriting than modernism gone to seed. That may be especially true of Louis Kahn’s work because Kahn hid nothing; it was part of his bravery, and his ethics, to put every trick and technique on view, exposing it all with as much light as his walls could contain. If you revere his architecture as I do, you want the fit and finish of his final building, the Yale Center for British Art, which reopens on May 11 after an elaborate conservation project, to live up to the architect’s exceptional honesty by giving you his bravery unfiltered, undiluted, and with all of the serene thrills of 1977. And so it has.

The Yale Center had not gone to seed but it had, in the parlance of conservationists, “drifted” from its original moment. Much of the recent renovation took place behind the scenes with countless mechanical upgrades in plumbing, wiring, and telecommunications. But what the visitor will respond to are the visible parts of the conservation task: the rich color of the oak panels has been restored; the movable gallery partitions (the pogo walls) with their restful linen covering now float as Kahn had intended; there is new wool carpeting; intrusive planters added at a later point for some obscure reason have been removed; scuff marks, condensation damage, and so forth have been remedied.

We come here for the light, the textures, the architect’s heroic decisions that make this quietly bold building fit its collections so beautifully. Every bit of conservation or restoration, no matter how tiny, has been made for that purpose and it is all documented in an exhaustive book, Louis I. Kahn and the Yale Center for British Art: A Conservation Plan by Peter Inskip and Stephen Gee, which I found thoroughly fascinating. Kahn did not live to finish this building (he died in 1974) so it is heartening to see how the museum has now restored and completed his original vision, a work of art containing works of art.

Views of the fourth floor galleries as recently restored, showing art from the Paul Mellon Collection. Caspole photographs. Left to right: A Young Girl with an Enslaved Servant and a Dog by Bartholomew Dandridge, c. 1725; A Macaw, Ducks, Parrots and Other Birds in a Landscape by Jacob Bogdani, 1708–1710; and Henry Portman Seymour by Sir Godfrey Kneller, 1714.

The Yale Center for British Art is confined on a dense New Haven block. Its exterior, responsive to both town and gown with shops below and galleries and library above, had, by necessity, to be more modest than Kahn’s museum masterpiece, the Kimbell Art Museum in Texas. The center’s dramatic four-story entrance court is, of course, another matter, being pure stupendous Kahn, while the galleries themselves split the difference between surprise and serenity.

Interestingly, although the collection was previously installed thematically with portraits, landscape paintings, and sporting art grouped together, it now tells the story of British art chronologically, beginning with the Tudor period and culminating in the present. The wall labels are somehow informative without being visually intrusive, which is exactly what you want as you move through these beautiful spaces. There may be an audio component for those who want it, and if by Matthew Hargraves, the chief curator, everyone will want it, though I’d recommend a silent stroll first, followed by a tour in the company of Hargraves.

I once paused to listen to Louis Kahn as he was talking with a group of students on a Philadelphia sidewalk. “The building,” he said, looking up at an unsuccessful piece of architecture, “wants to be a tree.” Kahn was given to such seemingly gnomic statements but he was simply saying that a building needs light to flourish and an organic life consonant with its nature. The Yale Center for British Art has both, of course, and now it is easier to see that.