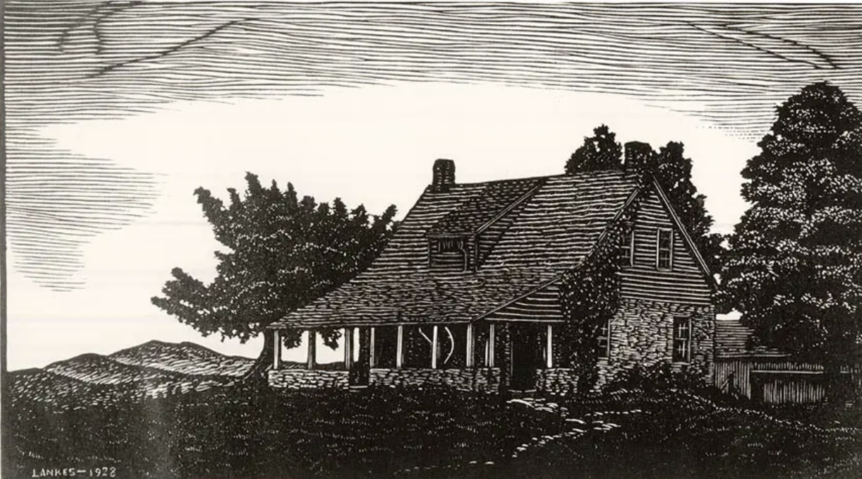 This week’s installment of the Eye is guest-edited by our friend, Bennington Museum curator Jamie Franklin. The Green Mountains of Vermont are home to far more than craft breweries, brilliant blankets of color in autumn, and the finest skiing on the East Coast. Vermont is rich in history and artistic culture. Allow Mr. Franklin to guide you through some of the exhibitions and permanent works in the collection of the Bennington Museum, where he has been in his post since 2005. His passion for American art has led him to present shows dedicated to Rockwell Kent, Grandma Moses, Milton Avery, Alice Neel, and many others. For a little more background on Jamie, check out this “tour” of his tremendous collection of self taught art. Enjoy!

MOSES IN JAPAN AND FROST IN SPRING

Bennington Museum reopened its doors to the public on April 2 (visit benningtonmuseum.org for our latest hours) after a three-month winter break with lots of exciting exhibitions covering everything from the continuum of Abenaki culture in our region from the pre-colonial era to the present—a collaboration with the Vermont Abenaki Artists Association—to a site-specific installation by Bennington-based artist J. Stoner Blackwell reflecting on our planet’s current plastic problem. While we are deeply committed to the local here at the Bennington Museum, it always amazes me how far the culture and history of this little New England town reaches into the larger world.

Of course, we couldn’t talk about the Bennington Museum without a mention of Anna Mary Robertson “Grandma” Moses. With the largest public collection of her work in the world, we always have a gallery devoted to her, which features between twenty-five and thirty works at any given time. While Moses lived and worked just across the Vermont/New York border from Bennington for most of her life, she’s had an international following since the immediate aftermath of World War II. A few of our favorite works by Moses from our collection, including The Country Wedding and an eighteenth-century tilt-top table she painted and used as an easel, are currently on a road trip to Japan, in a retrospective  exhibition that opened on April 17 at the Abeno Harukas Art Museum and will travel to four more venues in Japan over the course of the next year.

Among the exhibitions that opened at the Bennington Museum on April 2 is Robert Frost, At Present in Vermont, which has a good, long run (through November 7), so you have plenty of time to get vaccinated and put Bennington in your summer or fall travel plans. This exhibition explores the life, work, and artistic context of the four-time Pulitzer Prize–winning poet, who was also Vermont Poet Laureate during the years he lived in South Shaftsbury, just north of Bennington, from 1920 to 1938. Showcased alongside books and manuscripts that explore Frost’s personal life and literary legacy in Bennington County is the work of a large network of artists and writers who he worked closely with during these years, including Charles Burchfield, Dorothy Bingham Miller, J. J. Lankes, Luigi Lucioni, Rockwell Kent, Carl Ruggles, Clara Sipprell, Dorothy Canfield Fisher, Sarah Cleghorn, Walter and Margaret Hard, Zephine Humphrey, Sinclair Lewis, Vrest Orton, and Genevieve Taggard.

If you want to do some digging of your own before visiting the exhibition in person, I recommend the third volume of Frost’s letters, covering the dates 1929–1936, which was published last month by Harvard University Press. As might be expected, the personal and professional correspondence of the poet is a joy to read. With his characteristic dry Yankee wit and probing insight, his letters are filled with insights into both the man and his times. One of my favorites from this volume (pp. 205–207)—the original is now on view in Bennington—was written on October 23, 1931, to one of Frost’s closest Vermont friends, Vrest Orton, a publisher, writer, and businessman who would go on to found the Vermont Country Store. Frost was famously politically conservative, and in this letter he makes clear his objection to America being “sovietized under a Stalin or other son-of-a-Marx.” However, he also reveals his complex, contrarian nature, ending the letter by noting, “I may be a radical and long for revolution, but I shall have to choose the kind of revolution.”

April is my favorite time of year in Vermont and I can’t leave Frost behind without noting just how perceptive he was about the ephemeral nature of spring in New England. One of the stars of the Frost exhibition will be Charles Burchfield’s large-scale watercolor The Glory of Spring from the collection of the Williams College Museum of Art, just down the road from Bennington. The Burchfield will be installed in the exhibition beginning April 30. In the exhibition, Burchfield’s transcendent vision of vernal pools is paired with an excerpt from Frost’s “Spring Pools”: “These pools that, though in forests, still reflect/ The total sky almost without defect,/ And like the flowers beside them, chill and shiver,/ Will like the flowers beside them soon be gone,/ And yet not out by any brook or river,/ But up by roots to bring dark foliage on.”

Vermont signed the first civil union legislation in the nation into law in 2001 and legalized same sex marriage in 2009, six years before it was made legal at the federal level. However, it may come as a surprise that same sex relationships have been publicly acknowledged, even widely accepted, in our small rural communities for over two centuries. The double silhouette of Sylvia Drake and Charity Bryant, featured in Bennington Museum’s current exhibition Love, Marriage, and Divorce, which runs through the end of the year, has been called the earliest portrait of a same-sex couple in America. (Note: due to the work’s sensitivity to light, the original will only be on view from late June through early September).

Dona Ann McAdams’ retrospective exhibition Performative Acts, featuring approximately three dozen photographs from McAdam’s expansive body of work over the last forty years, provides another facet of the evolving history of LGBTQ+ rights in America, including her renowned documentation of the avant-garde performance and queer liberation scenes in New York City in the ’80s and ’90s.

Bennington Museum recently added two sculptures and a drawing by Stanley Rosen, who taught at Bennington College from 1960–1991, to its permanent collection. When Rosen entered the New York art world in the late 1950s, ceramics as a medium was just beginning to break free from the historical strictures of function and domesticity, and commencing its assault on the thick walls that had long been perceived to exist between craft and “fine” art. Shapes from Out of Nowhere: Ceramics from the Robert A. Ellison Jr. Collection, currently on view at the Metropolitan Museum of Art, features Rosen’s work alongside a who’s who roster of artists who have been instrumental in bringing clay into the mainstream art world dialogue over the last one hundred–plus years. The beautiful catalog that accompanies the show is a must-read for anyone interested in the intersections between clay and modern art over the last century.

A POTTERY POSTSCRIPT OR CLAY CODA

I couldn’t leave you without touching on salt-glazed stoneware of the type Bennington has been synonymous with since the nineteenth century, when the Norton family produced what has become some of the most lauded utilitarian pottery ever produced in America. [Take a look at our recent Object Lesson column on Norton pottery. — Ed.] As a steward of the defining collections of Norton stoneware, I enjoy following the market for this material, which has been exceptionally strong for the last few decades. And anyone who follows this market knows about Crocker Farm Auctions. Here is my favorite piece from their most recent sale which ended on April 9. As we all move forward in 2021, we can confidently say that hindsight is definitely 2020!