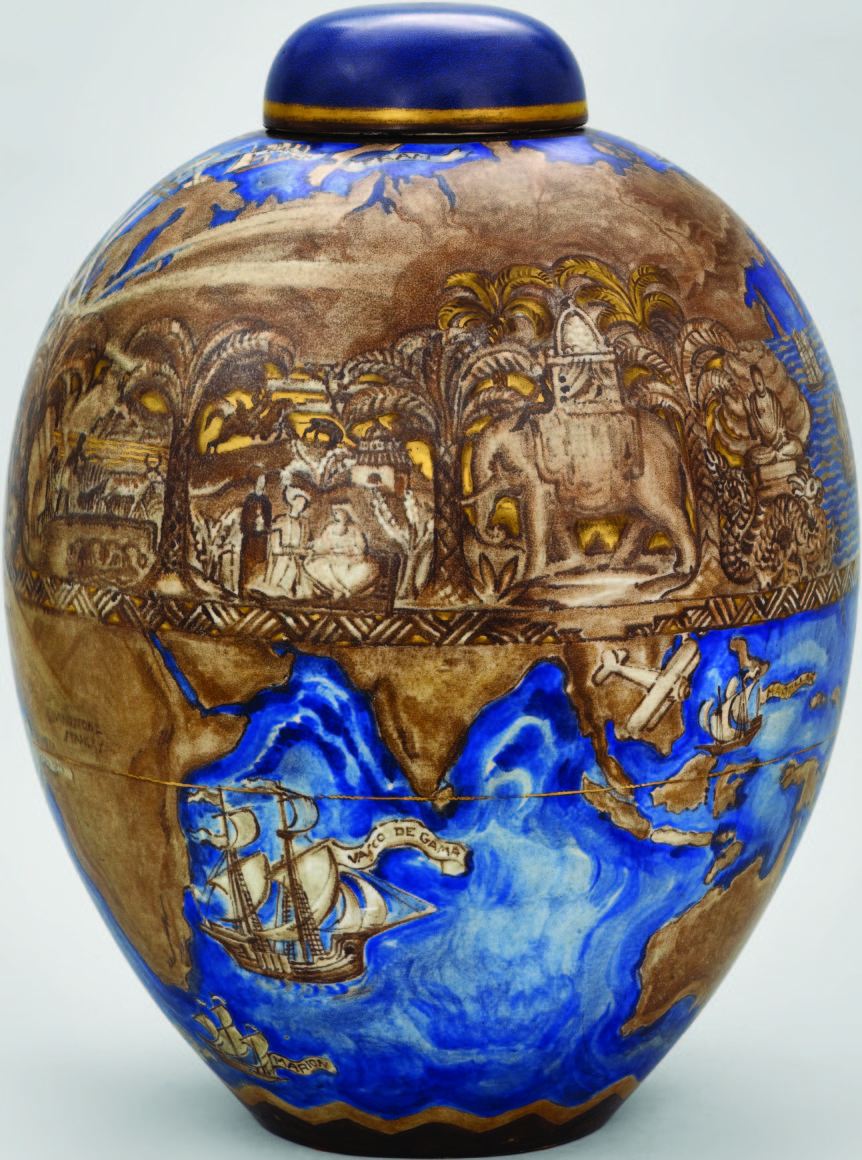 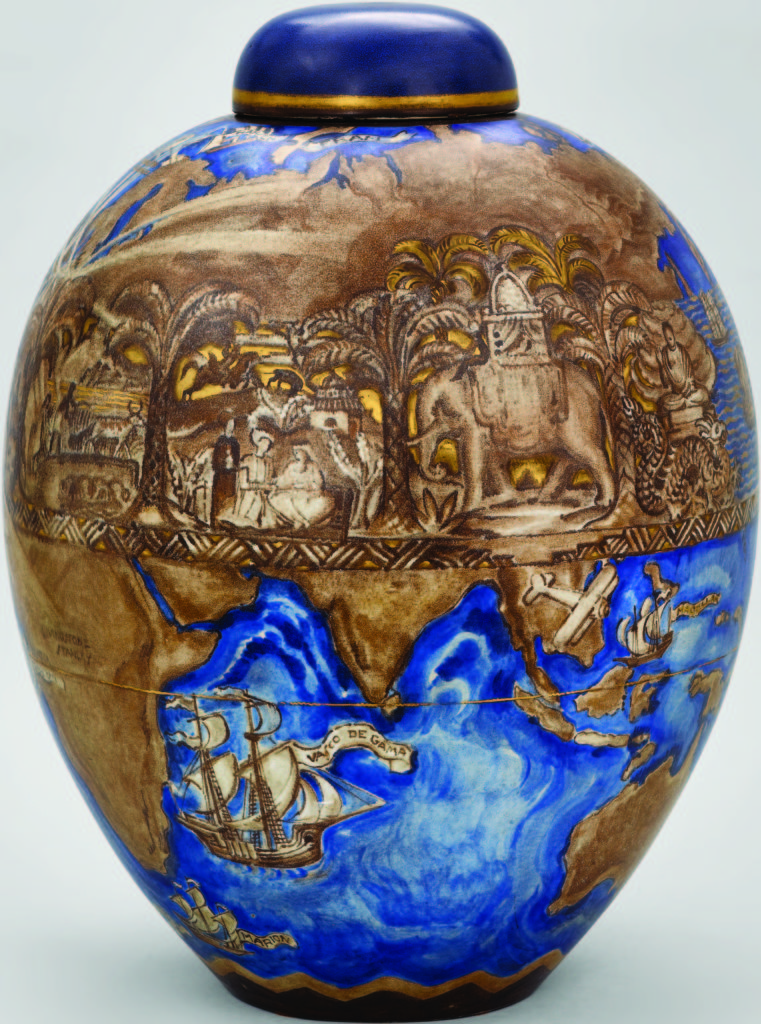 When you enter the Wolfsonian museum, a Mediterranean revival building designed in 1927 by the firm Robertson & Patterson, one of the first things that catches the eye is a monumental “frozen fountain”—a spectacular window grille in glazed terra-cotta that serves as an introduction to the art deco style. It originally embellished the facade of the Norris Theatre in Norristown, Pennsylvania (Fig. 5). When the theater was demolished in 1983 to make way for a McDonald’s, this massive decorative grate was acquired and saved by Mitchell Wolfson Jr., the museum’s founder, and chosen as a focal point for the museum’s lobby by architect Mark Hampton, who integrated it into a real fountain. 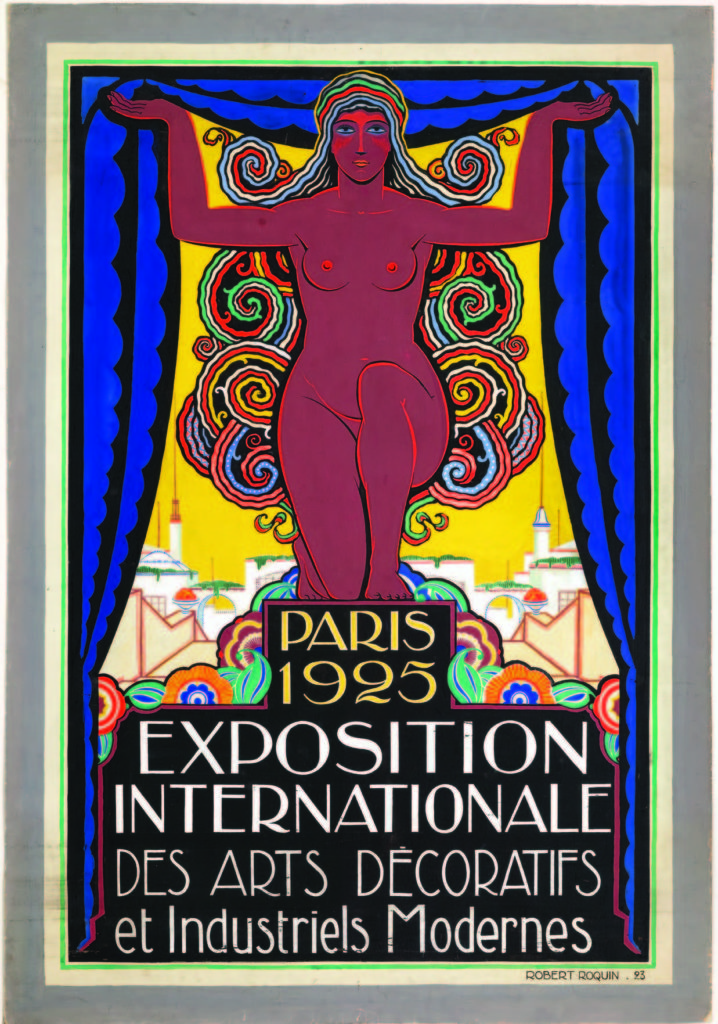 The symmetrical and ornamental composition of ascending stylized natural elements of the “frozen fountain” became a popular motif in art deco architecture and applied art after being introduced through Edgar Brandt’s wrought iron and René Lalique’s glass at the Paris Exposition Internationale des arts décoratifs et industriels modernes. This famous showcase, from which the term “art deco” later derived, was originally planned for 1915, but delayed a decade by the First World War and finally held in 1925. It featured a wide variety of international, modern decorative arts and architecture with an emphasis on geometric ornament, artisanal skill, and the use of precious and exotic materials. More than twenty countries participated, but a huge section was dedicated to the host nation with the aim of establishing the supremacy of French taste and luxury goods. Since then, art deco has always been closely associated with France, but variants of the style had already developed all over Europe as confirmed by the displays in the foreign pavilions.

The Wolfsonian’s exhibition Deco: Luxury to Mass Market offers an overview of this new aesthetic, presenting its unfamiliar dimensions and different iterations in Europe and across the Atlantic. Art deco is primarily characterized by an emphasis on surface decoration, symmetry, angularity, and stylization. Nevertheless, it presents different nuances, depending on its national variations, which combine local traditions with modernist tendencies, drawing inspiration mostly from nature, historical precedent, abstract geometry, and exotic cultures. 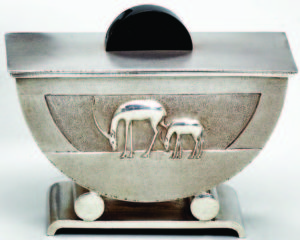 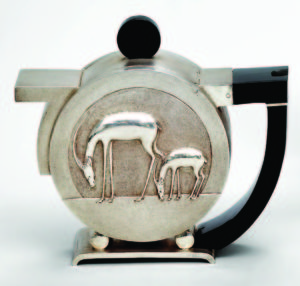 Interest in the arts of colonial countries in Asia and Africa led French artists to explore new themes and motifs drawn from these remote cultures. The Wolfsonian’s exhibition is introduced by a never-before-seen design drawing for a poster announcing the 1925 Paris exposition by French illustrator Robert Roquin—a remarkable example of art deco graphic design merging the naked female figure and colonial architecture in the background with symmetry, bright colors, and geometric floral motifs (Fig. 2).

The combination of colonial sources and stylization of nature is also found in the decorative column titled La cueillette des oranges [Picking oranges], realized in Marrakesh in 1922 by sculptress Céline Lepage (Fig. 3), which depicts African women as caryatids immersed in the stylized foliage of orange trees. Some copies of the column were later produced by the national porcelain factory, which contributed to the success of French art deco ceramics through its own pavilions at the 1925 exposition. Inspired by the forms of Asian porcelain, Henri Rapin, designer of the Sèvres pavilion’s garden, created a vase titled Mappemonde [Globe] for the extraordinary decoration by Victor Menu illustrating the foreign worlds encountered by European explorers (Fig. 1). 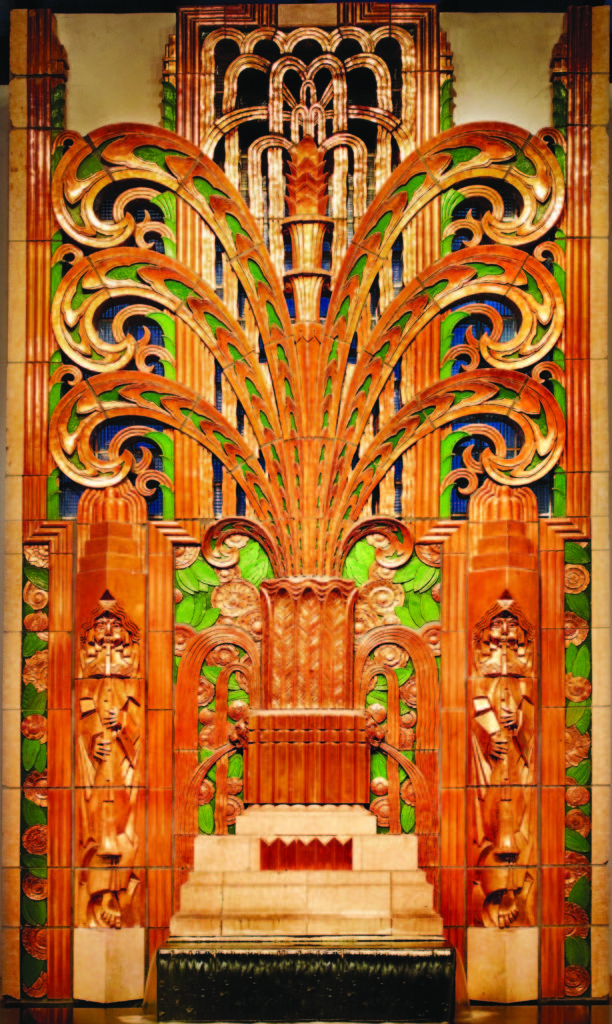 Fascination for the exotic further developed all over Europe, and appropriated motifs such as the gazelle, which, like the greyhound, became an oft-seen part of the art deco bestiary. Grazing gazelles appear amid abstracted vegetation on a silver tea set manufactured in India (Fig. 4) or topping an archaically styled urn by Umberto Bellotto. This iron urn—presented at the Venice Biennale in 1932—demonstrates an Italian tendency to merge exotic imagery with references to ancient artifacts. In Germany, on the contrary, the rococo tradition influenced the development of the new style, as can be seen in a cabinet by Gerhard Schliepstein that alludes simultaneously to Chinese red lacquer and cubism (Fig. 6). 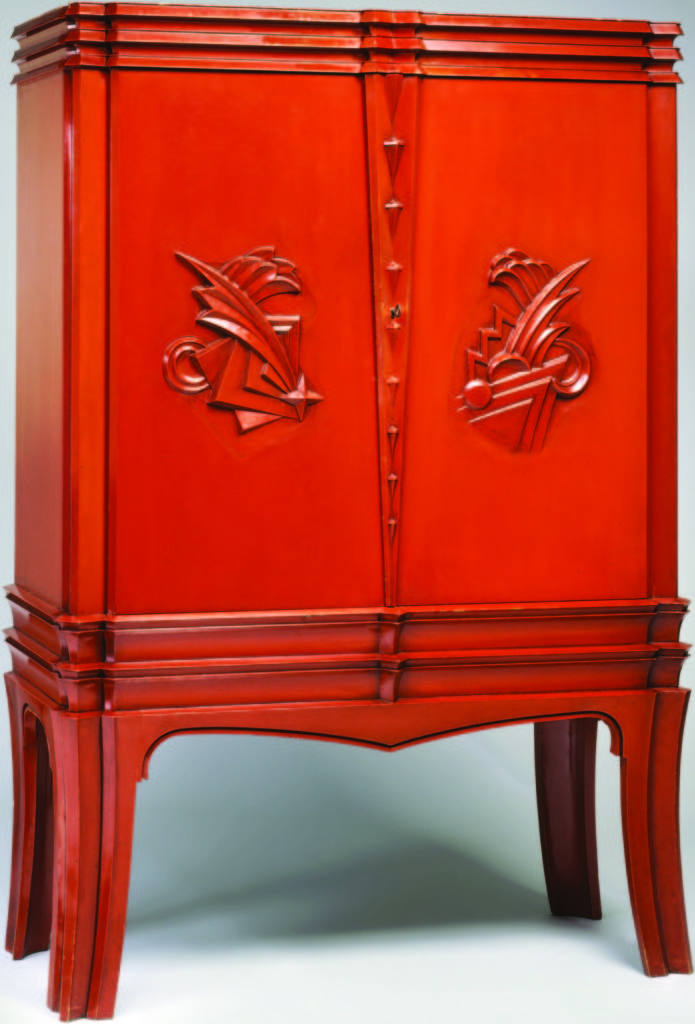 In the Netherlands, the culture of their East Indies colonies helped shape a modern Dutch aesthetic, that was represented at the Paris exposition primarily by work of the expressionism influenced architects and designers of the Amsterdam school. The shape and the vibrant geometric pattern of the vase titled Kracht [Strength] by Dutch ceramist Theo Colenbrander echo Indonesian architectural forms and motifs (Fig. 7). The same sources are evident in the form and elaborate brickwork of the Dutch pavilion designed by Jan F. Staal, in which several examples of the vase were displayed. 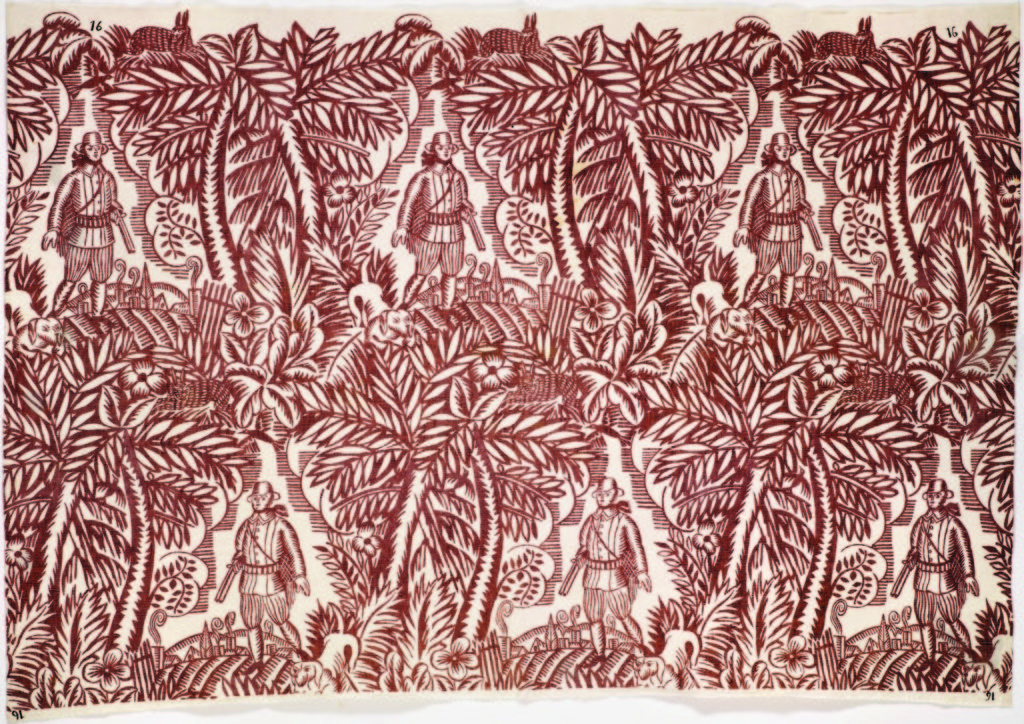 Ten years after the 1925 exposition, France found another way to spread its image of luxury and grandeur in the world when the ocean liner Normandieentered service in 1935. The renowned ship of the Compagnie Générale Transatlantique looked back at the arts and traditions of the Normandy region in its decoration. Leading French artists, such as René Lalique, Jean Dunand, and Jean Dupas collaborated in the design of its refined interiors, made in lavish and exotic materials like the gold and silver leaf on the Dupas verre églomisé murals in the first-class grand salon (Fig. 9). Jean-Maurice Rothschild designed the furnishings. The chairs—one is on display in the Wolfsonian exhibition—are updated versions of Louis XVI pieces, characterized by simple, elegant lines, and made more precious with the use of gold-leaf trim. The vibrant tone of its red upholstery is highlighted with floral bouquets, a common motif in the French art deco repertoire. 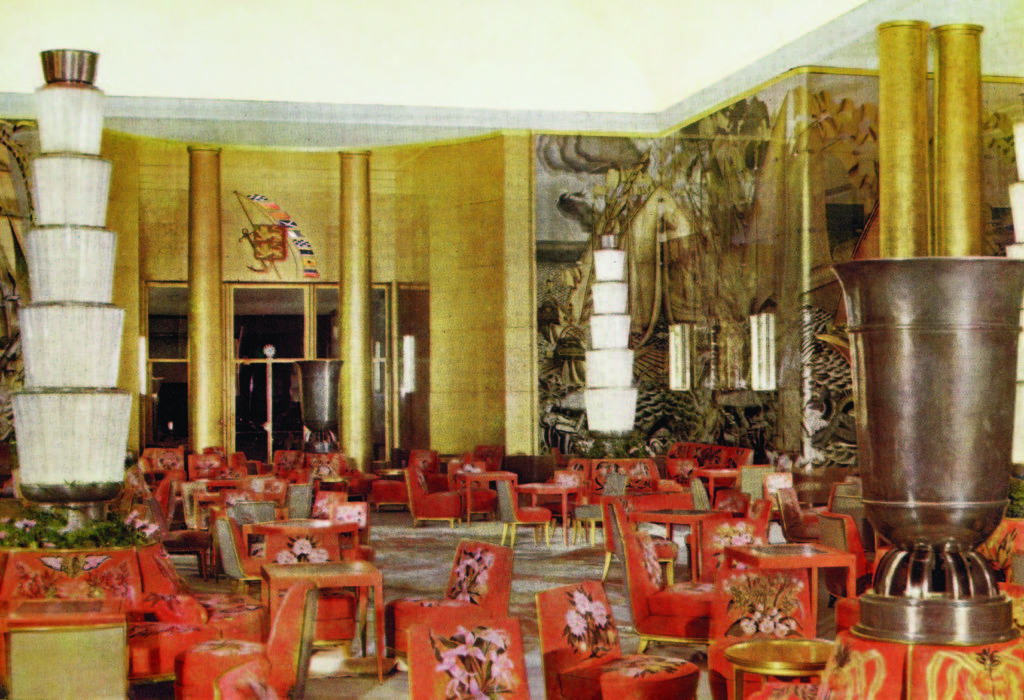 If France invoked Louis period styles in the search for a new idiom and Germany and Austria looked to their national baroque, rococo, and Biedermeier traditions, Italy drew inspiration mostly from its folk culture and classical past. The architect Gio Ponti, artistic director at the porcelain factory Richard-Ginori starting in 1923, interpreted Greco-Roman precedents with a modern sensibility in the plate titled Le attività gentili. I progenitori [Noble Activities. Our Ancestors], representing arts and industry (Fig. 10). Ponti viewed the classical lexicon as a model for creating a modern Italian aesthetic in the decorative arts and in architecture. 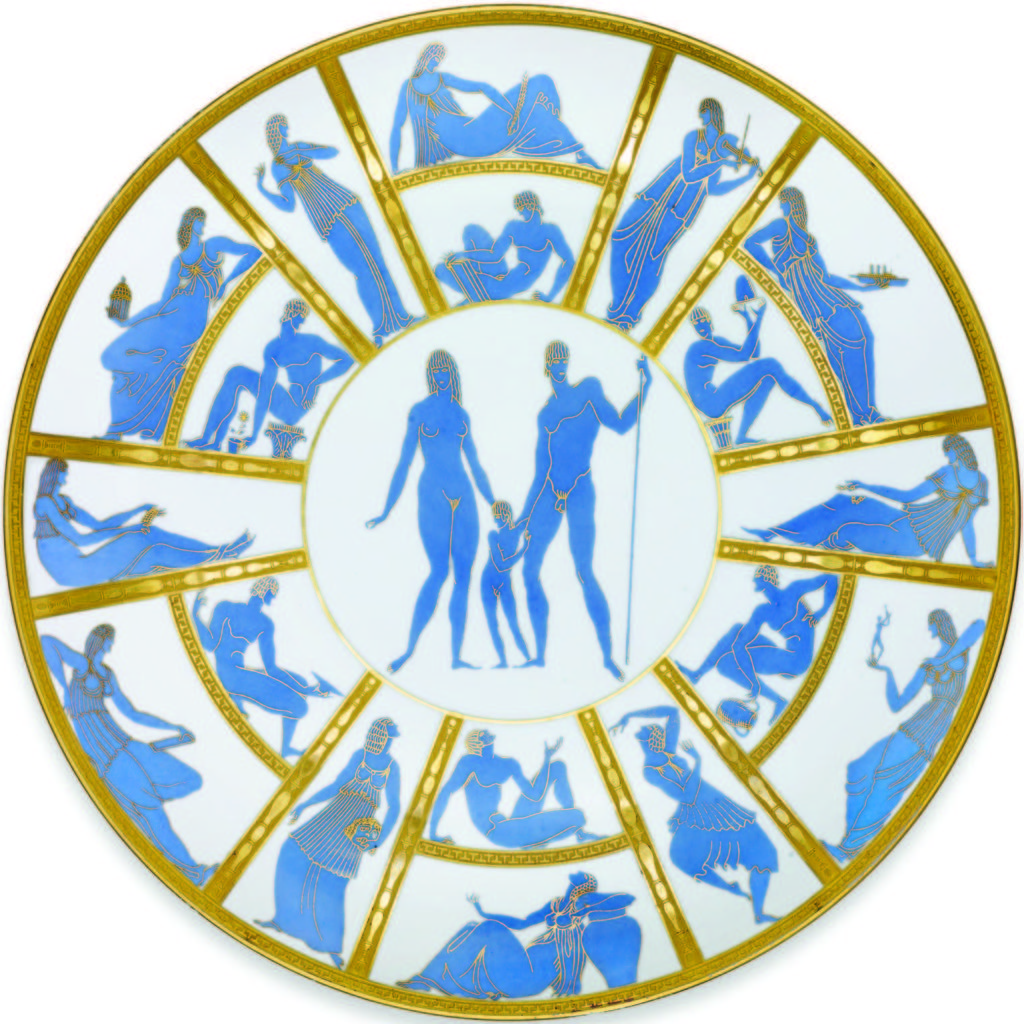 During the 1930s, the elegance and fine artisan-ship of early art deco gave way to a more industrial aesthetic. Designers and artisans turned to more affordable materials and limited ornamentation. An interesting example of this evolution in the Wolfsonian exhibition is an aluminum gate by the Italian workshop Officina Matteucci in Faenza, which switched from making decorative architectural elements in wrought iron to the newer material (Fig. 11). The designer was Ernesto Puppo, a modernist architect, who reduced the classical forms of column and arch to an abstracted frame for the stylized decorative profiles. The gate, presented at the 1933 National Handicrafts Trade Fair in Florence, testifies to the importance of national and international expositions for the spread of art deco around the world. Department stores further promoted the new aesthetic and confirmed its commercial potential toward mass production when it finally settled in the United States. 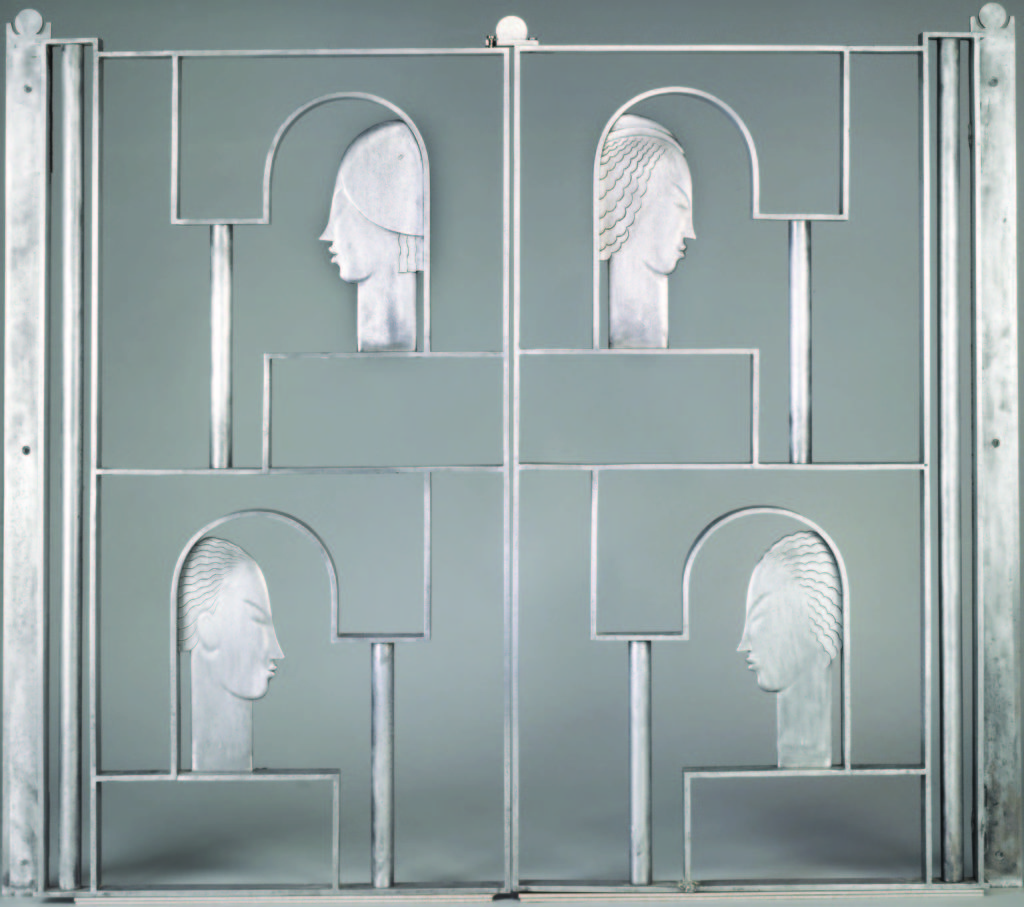 SILVIA BARISIONE is a curator at the Wolfsonian–FIU in Miami Beach after spending two decades at its sister institution, the Wolfsoniana in Genoa, Italy. She co-curated the Wolfsonian exhibition Deco: Luxury to Mass Market with Shoshana Resnikoff and Whitney Richardson.