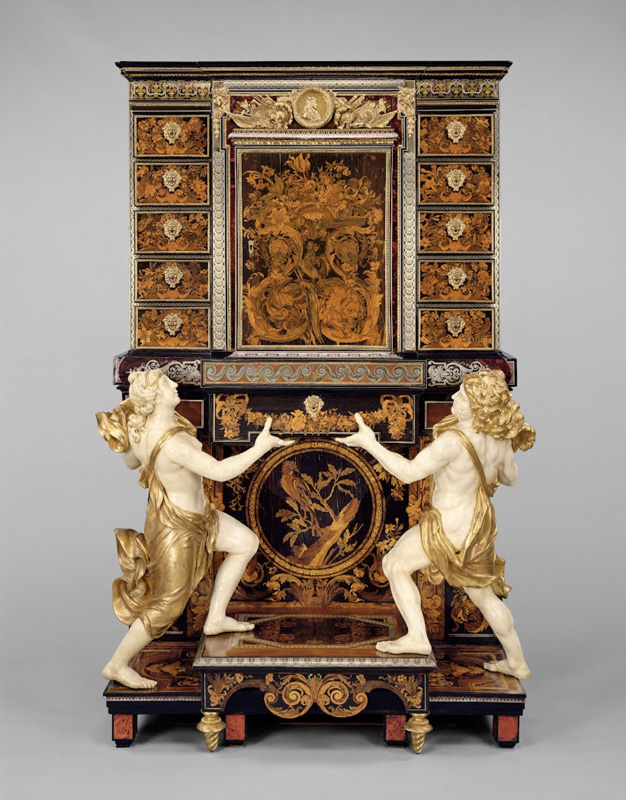 The Getty comes complete to your computer screen in this impressive virtual tour. Explore the museum floor-by-floor, or browse by images in the collection as a starting point. Most objects, such as this monumental Cabinet on Stand, feature a “View in Street View” option that you can click to see the object in-situ. The tour and accompanying features work best on Google Chrome.

But even more options abound as part of their Arts & Culture page, including this interactive article of works selected by the Getty’s director, Timothy Potts and acquired in 2019. Additional interactive stories include a discussion of 18th century pastel portraits, and food as depicted in Middle Ages and Renaissance artworks. (Fans of the food story should also give Meredith Chilton’s Changing Tastesa look.)

As you may recall from our recent newsletter, the Frank Lloyd Wright Foundation and Unity Temple Restoration Foundations have teamed up and are bringing to you a series of virtual tours featuring twelve of Wright’s most important houses using the social tag #WrightVirtualVisit.

One of them, the Hollyhock House in Los Angeles, has both a #WrightVirtualVisit video and a comprehensive virtual tour site. (Both are worthy of viewing!) The virtual tour includes text and audio descriptions of key features of the architecture and grounds, making for a highly accessible experience.

Accompanying the virtual tour, the City of Los Angeles Department of Cultural Affairs has also made available the Hollyhock House Archive; a collection of 81 items related to the house’s construction. You can browse by item or collection.

If you’re cooped-up indoors—especially if you’re a city dweller—you might find a small dose of refreshment in the National Gallery’s new virtual tour of its exhibition True to Nature. The show is a survey of plein air paintings from the late 18th and early 19th centuries, when artists such as John Constable, Jean-Baptiste-Camille Corot, and Simon Denis, took their oils and brushes out of the studio to travel and paint in the open air, and made that practice an essential part of an artistic education. Tip: click the circles on the floor to position yourself in front of artworks, and the wheel of your mouse to zoom in on them.

Our March/April issue included a brief article the Bard Graduate Center’s Eileen Gray exhibition, the first ever in the United States to explore the full range of Gray’s accomplishments. Katherine Lanza wrote that “the exhibition is organized into five chronological sections. It begins with Gray’s training at London’s Slade School of Fine Art, then examines the opening of Galerie Jean Désert in Paris in 1922 (Gray’s gallery, disguised by a male pseudonym), and ends with a focus on her evolution into architecture.” Bard has now created a digital exhibition format for the show, and new features (including a video tour) are being added daily. It follows a similar chronological approach as the physical exhibition, though visitors an access each piece of the chronology out of order should they choose.

For a primer, read Lanza’s coverage for TMA or review the excerpts of the exhibition catalogue that are featured in the digital exhibition space.

Developed and managed by the Maine Historical Society (MHS), the Maine Memory Network allows cultural institutions to share digital copies of items in their collections.

There is a considerable archive of exhibitions and a timeline that can be explored, but we’ve also selected some TMA favorites to visit:

The Digital Public Library of America (DPLA) is a nonprofit devoted to bringing collections of photographs, books, maps, news footage, oral histories, personal letters, museum objects, artworks, government documents, and any other digital artifacts into public view. Partners organizations – which allow access and use of their digitized collections – include the J Paul Getty Trust, the Library of Congress, and the New York Public Library.

In addition to browsing the DPLA holdings, numerous exhibitions have been constructed to better highlight the available materials. Among these, TMA favorites include: