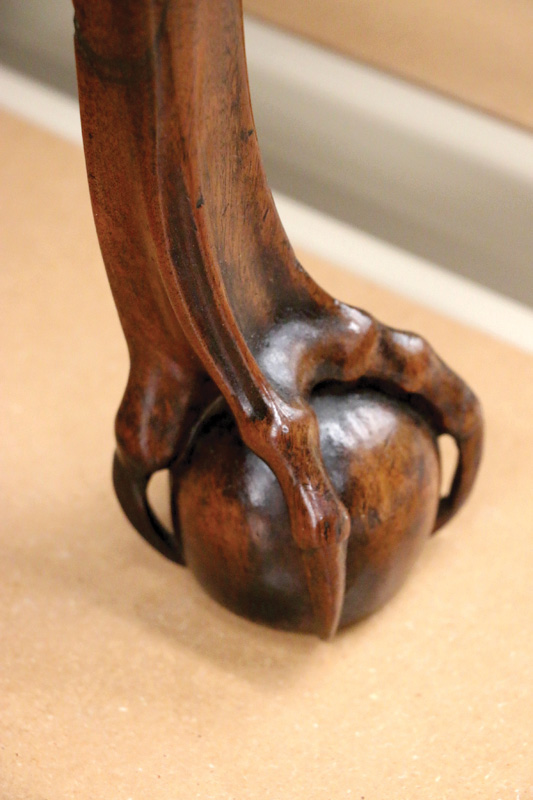 What with the august environs of the Yale University campus—a mix of stately Gothic revival buildings and modernist masterworks by the likes of Louis Kahn and Paul Rudolph—those who came to the school to learn about American decorative arts might have felt they’d fallen victim to the old bait-and-switch. Far from having distinguished quarters, the university art gallery’s famed American Furniture Study Center—with holdings that have been described as “a three-dimensional textbook of American furniture dating from 1650 to the present”—was housed in the cramped and flood-prone basement of a one-time commercial bakery on York Street in downtown New Haven, where the ceiling was lined with pipes, and hung with radiators that had been known to fall down sometimes.

But since September, the study center has enjoyed a proper residence—indeed, a relatively luxurious one, on Yale’s twelve-year-old West Campus. That site is a former Bayer Pharmaceuticals complex of seventeen buildings, about a twenty-minute shuttle bus ride from the city center, which is now home to the university’s scientific research labs as well as the Yale Art Gallery’s conservation unit and open-access decorative arts storage facility.

The furniture study center occupies a brightly lit, two-level space encompassing nearly eighteen thousand square feet—for reference, better than half the size of the American Wing of the Metropolitan Museum of Art in New York. The center’s collection includes more than thirteen hundred objects, among them nine hundred pieces of furniture and mirrors, fifty clocks, and some three hundred carved and turned modern wood vessels and sculptural works. The center also houses the Sack Family Archive, a trove of thousands of photos and hundreds of books and notebooks compiled by the principals of the legendary New York gallery Israel Sack, Inc. Far from the confined rooms with narrow aisles of the past, “here you can stroll through and see history,” says Patricia E. Kane, the curator who oversees the collection with her fellow curator John Stuart Gordon, who supervises the study center.

About half the works in the study center are from the monumental collection of early American furniture, silver, pewter, glass, and other decorative artworks amassed, in a sustained patriotic fervor, by the New York lawyer and government official Francis P. Garvan in the early decades of the twentieth century. In 1930, seven years before his death, he donated the collection to Yale, his alma mater, in the name of his wife, Mabel Brady Garvan. Having no place to put it, the school dispersed the collection around the campus and at historic sites in the East until the early 1950s when, as Gordon explains, “Mabel made the challenge that the objects in the collection should be brought back together and studied.” In 1959 the study center’s first curator, Meyric Rogers, finally drew everything together at the York Street location. Scholars made do. “We never put glass in front of our objects; we wanted students to be able to feel the turning of a seventeenth-century chair leg,” Gordon says, but he adds that even after six decades the frustrations endured: “We did everything we could to make the basement on York Street a museum space, but we couldn’t make it work.”

But that was then. The center’s fresh accommodations include numerous noteworthy features. Larger and heavier furniture pieces sit on palettes that can be moved with a forklift for 360-degree study. There are twenty interpretive display panels and cabinets showing, for example, drawer pulls and escutcheons by stylistic period, or an array of wood samples cut radially to reveal the distinctive grain of each. One particularly striking feature is a wall covered in architectural elements that Garvan collected, such as window frames and wooden mantelpieces. “Much of that was in storage and we’re thrilled to bring out examples of great interior architecture,” Kane says. “So often the woodworkers carving the chair legs were the same people carving the door frames and moldings.”

The study center is open for a weekly public tour. And if you like pizza, as ever we recommend Frank Pepe’s—sorry about that, Sally’s.