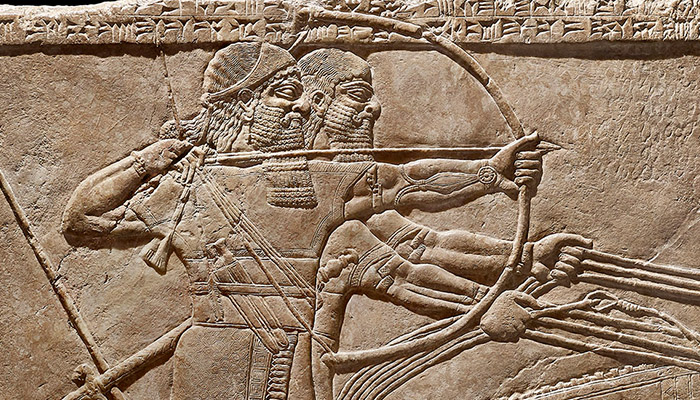 A vivid apocalyptic scene the English romantic artist John Martin is the focus in this single-work exhibition. getty.edu

Relief sculptures of the ninth to seventh centuries B.C. are featured in this collection, on loan from the British Museum, London. With so many reliefs destroyed and looted in the Middle East, these pieces have become precious examples of Assyrian renderings of myth, ritual, war, and life. getty.edu

The beautiful era? Not so beautiful, necessarily, according to the artists of the time. Rather than the obvious and glittering aspects of Parisian life between 1871 and 1914, artists like Pierre Bonnard and Henri de Toulouse-Lautrec turned to the details of raw and unfiltered life. The exuberant styles they, and their contemporaries, developed are on display in this exhibit. nortonsimon.org

Designing the New: Charles Rennie Mackintosh and the Glasgow Style at the Walters Art Museum, October 6 to January 5, 2020

Glasgow entrepreneur Miss Catherine Cranston’s old-fashioned self-branding mixed with her patronage of  cutting-edge Glasgow designers was magical. Cranston’s tearoom interiors commissions gave architect, designer, and artist Charles Rennie Mackintosh Mackintosh and his circle the freedom to develop a new visual language. In return, they gave her fantastical decorative experiences, the likes of which could be seen nowhere else in the world. thewalters.org

Amino’s experimental forms inspire more questions than answers, but for those who rise to the challenge, the questions are well worth asking. The Zimmerli Art Museum presents 19 sculptures of the oft-overlooked Black Mountain College faculty member. zimmerlimuseum.rutgers.edu

Picasso, Braque, and Leger at the Hyde Collection, October 6 to January 5, 2020

Names that speak for themselves, but with a focus on their contributions to printmaking. The medium puts the trios’ form and color on particularly spectacular display. hydecollection.org

Five hundred years ago this year, Leonardo da Vinci died—in the arms of the French king François I, according to legend—and museums around the world have felt called upon to solemnize this important milestone. The Met does so with a single work loaned by the Vatican Pinacoteca, the great Saint Jerome Praying in the Wilderness, a painting that was never completed but that occupied the master for most of his career. metmuseum.org

Play It Loud: Instruments of Rock and Roll at the Metropolitan Museum of Art, Fifth Avenue, to October 1

The Met pays homage to rock and roll legends in the museum’s first major exhibition focused on that musical genre. Highlights include Ringo Starr’s drum set, and several of Chuck Berry’s guitars. metmuseum.org

John Singer Sargent: Portraits in Charcoal at the Morgan Library and Museum, October 4 to January 12, 2020

Some fifty of John Singer Sargent’s bravura drawings will be on display. As striking for their technical facility as for the sitters’ biographies, the assortment includes statesmen, artists, actors, writers (with a bit of the Social Register and Burke’s Peerage mixed in). themorgan.org

Ernst Ludwig Kirchner at the Neue Galerie, October 3 to January 13, 2020

The artist’s work from across a thirty-year period will be on view this October, in a show exploring Kirchner’s expressionist style and way it changed in the three cities in which he lived, Dresden, Berlin, and Davos. neuegalerie.org

American Voyager: Herman Melville at 200 at the Rosenbach Museum and Library, October 3 to April 5, 2020

Commemorating the 200th anniversary of Herman Melville’s birth, the Rosenbach museum will examine the author’s life, works, and legacy. rosenbach.org

Forever Young: Representations of Childhood and Adolescence at the Newport Art Museum, October 4 to December 31

In a show that includes the work of artists from across three centuries, the Newport Art Museum takes a look at how we represent children in art. Featured are works by George Bellows, Winslow Homer, and Julia Overing. newportartmuseum.org

Howard Gardiner Cushing: The Beautiful Things of Life at the Newport Art Museum, to October 6 (by appointment only)

In celebration of the 100th anniversary of the original Cushing building, the museum is showcasing some of their finest works by the artist in his namesake structure. newportartmuseum.org

Luminous Landscapes: The Golden Age of British Watercolors at the Gibbes Museum of Art, to October 6

Rising up in the midst of the Charleston Historic District, what is today the Gibbes Museum of Art was founded in 1858 and has inhabited a sumptuous beaux-arts monument, inspired by the works of Andrea Palladio, since 1905. That noble structure, which reopened three years ago after a $13.5 million renovation, houses more than ten thousand works of art, as well as an inspired suite of special exhibitions. gibbesmuseum.org

Van Gogh and His Inspirations at the Columbia Museum of Art, October 4 to January 12, 2020

This exhibition showcases twelve works by Van Gogh, side by side with more than thirty works by artists that inspired the celebrated painter’s vision.  columbiamuseum.org

London’s largest antiques event, with 150 exhibitors from the UK and Europe, is held three times a year. It offers an unparalleled selection of period design from the 1700s to the 1970s, and is a destination for international decorators, collectors, and style-conscious private buyers. decorativefair.com

The oldest continuously operating international art and antiques fair on the West Coast, the show includes approximately sixty dealers from across the United States and Europe, offering for sale an extraordinary range of fine and decorative arts from around the world. sffallshow.org

Showcasing exceptional artisan-quality furniture, the show is now in its twenty-fourth year—the longest running exposition of its kind. The PFS continues to set the bar for the finest heirloom handmade furniture and furnishings in the United States. philadelphiafurnitureshow.com