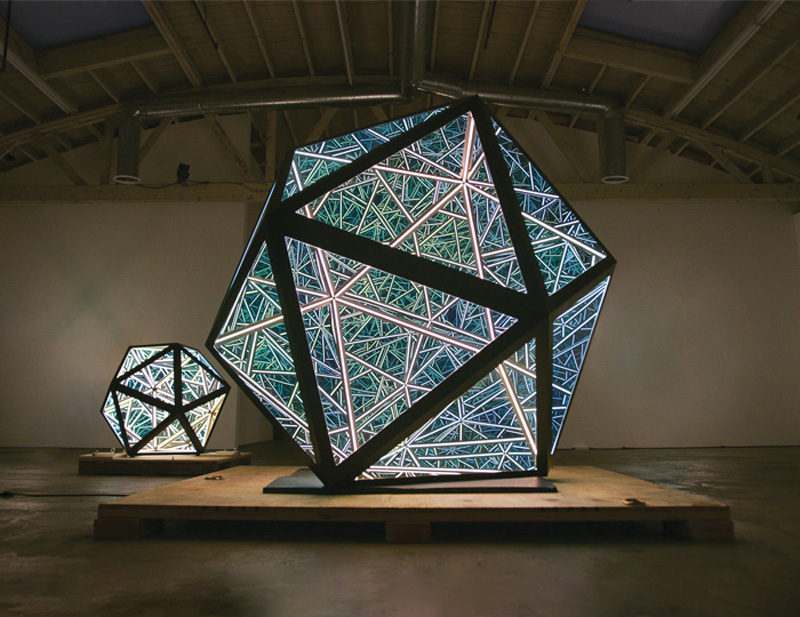 Crystals in Art: Ancient to Today at the Crystal Bridges Museum of American Art, to January 6, 2020

In an exhibition larger in scope than usual for the Arkansas museum, the history of our favorite glittering minerals is presented. Small- and large-scale installations offer viewers a range of interpretations and opportunities to ponder crystalline themes in science, religion, and art across the ages. crystalbridges.org

Historical cameras – from the early wooden boxes to the first mass-market digital camera – and the images they produced are on view in this exhibition. The effects of new advances in photography throughout the nearly two-hundred-year history of the medium are explored in depth, with an emphasis on their contribution to modern practices. getty.edu

Pueblo Dynasties: Master Potters from Matriarchs to Contemporaries at the Crocker Art Museum, to January 5, 2020

This expansive exhibition of more than 200 works of pottery focuses on Pueblo matriarch makers Nampeyo, Maria Martinez, Margaret Tafoya, and their descendants. The unique hallmarks of each potter’s practice are explored, with a special focus on the ways artistic intent changed from generation to generation. crockerart.org

Ceremonial Dress from Southwest China: The Ann B. Goodman Collection at the Yale University Art Gallery, to January 5, 2020

The ceremonial clothing of communities in Guizhou, Sichuan, Hunan, Yunnan, and other provinces of southwestern China is displayed in this visually rich exhibition. Fifteen ensembles, as well as silver headdress ornaments, necklaces, and bracelets, are on view. Particular attention is paid to the blend of traditional motifs and personal artistic vision that can be discerned in each garment. artgallery.yale.edu

Hamilton and Burr: Who Wrote Their Stories? at the Winterthur Museum and Country Estate, to January 5, 2020

Lin Manuel Miranda may have rewritten the story of Alexander Hamilton and Aaron Burr for Hamilton: The Musical; but who originally shaped the legacies of these statesmen? Beginning with letters written shortly after the famous and deadly duel, historical documents in this show chart the legends of honor and infamy that grew around the Treasury secretary and the Vice President. winterthur.org

This exhibition explores the ways that small businesses—from car dealerships and cafés to nightclubs and factories—have presented themselves to the world through photographs, starting at the dawn of the medium. The show makes for an amusing take on a phrase usually reserved for members of sports teams: face of the franchise. winterthur.org

By the Light of the Silvery Moon: A Century of Lunar Photographs at the National Gallery of Art, to January 5, 2020

Sammy Dalati, senior editor of ANTIQUES, reminds us: “For much of human history, people were forced to imagine what the moon was really like. Was it flat like a disk? Was it inhabited? Photography answered those questions and more, allowing earthbound observers to unlock the moon’s secrets in the lead-up to visiting it in person on July 20, 1969.” The National Gallery of Art digs into this history with 100 years of lunar photography. nga.gov

The villas and palaces were decorated with a rich array of curtains, wall hangings, and other luxurious fabrics. Amazon warriors and cupids gaze from the threadbare remains of Egyptian wall hangings, testifying to the influence of Hellenistic culture on Egypt during the centuries following its conquest by Alexander the Great; while Christian imagery on textiles is the legacy of the Copts, who founded their church in the decades after the death of Jesus. The desert climate has done much to preserve these remains—tattered though they be—in this crossroads of culture. museum.gw.edu

Robert Rauschenberg: America Mix-16 at the Tampa Museum of Art, to January 5, 2020

Rauschenberg travelled around the US, taking photographs of found vignettes or objects along the way. Suite 1(America Mix-16) consists of 16 photogravures of Rauschenberg’s found-scenes, which capture the beauty in the mundane, dilapidated, and overlooked. tampamuseum.org

Rubens, Rembrandt, and Drawing in the Golden Age at the Art Institute of Chicago, to January 5, 2020

The Netherlands experienced great upheaval in the seventeenth century; politics, religion, and science locked in battle. Yet this intense milieu produced some of the greatest art in the Western canon, and the twin titans of the day were Rubens and Rembrandt. The exhibit highlights their works in chalk, ink, and watercolor, as a means of understanding the interlocking social changes of the period. artic.edu

Designing the New: Charles Rennie Mackintosh and the Glasgow Style at the Walters Art Museum, to January 5, 2020

Glasgow entrepreneur Miss Catherine Cranston’s old-fashioned self-branding mixed with her patronage of cutting-edge Glasgow designers was magical. Cranston’s tea room interiors commissions gave architect, designer, and artist Charles Rennie Mackintosh and his circle the freedom to develop a new visual language. In return, they gave her fantastical decorative experiences, the likes of which could be seen nowhere else in the world. If you can’t make it to Baltimore before the show closes, check out our article on the exhibition. thewalters.org

A close friend of Charles Russell, Olaf Carl Seltzer was an equally avid painter of the American west. Their friendship, as well as the influence of Seltzer’s early life and other experiences on the northern plains of Montana, are the focus of this exhibition. Major works from both private and public collections have been loaned, offering an expansive look at Seltzer’s prolific painting. cmrussell.org

Agnes Pelton: Desert Transcendentalist at the New Mexico Museum of Art, to January 5, 2020

Picasso, Braque, and Leger at the Hyde Collection, to January 5, 2020

Names that speak for themselves, but with a focus on their contributions to printmaking. The medium puts the trios’ form and color on particularly spectacular display. hydecollection.org

French Fashion, Women, and the First World War at the Bard Graduate Center, to January 5, 2020

This exhibition focuses on gender politics as they relate to war-time changes during the first World War. The exploration is built using dress, postcards, posters, and fashion magazines of the time – including garments by Coco Chanel and Jeanne Lanvin. Contemporary responses are also included in the work of Artists in Residence Ellen Sampson, Emily Spivack, and The Rational Dress Society. bgc.bard.edu

Pierre Cardin: Future Fashion at the Brooklyn Museum, to January 5, 2020

As we reported earlier this year, “To visit the new exhibition Pierre Cardin: Future Fashion at the Brooklyn Museum is to be immersed in a mod, cosmopolitan world populated by the likes of Brigitte Bardot, Alain Delon, Mia Farrow, and the models Twiggy and Jean Shrimpton.” If you have yet to explore Cardin’s avant-garde designs and immerse yourself in this exhibition, go while you still have the chance! brooklynmuseum.org

Manet: Three Paintings from the Norton Simon Museum at the Frick Collection, to January 5, 2020

Still Life with Fish and Shrimp, The Ragpicker, and Madame Manet are on view; for the first time together outside the Norton Simon since being acquired. frick.org

The Last Knight: The Art, Armor, and Ambition of Maximilian I at the Metropolitan Museum of Art, to January 5, 2020

“On the five hundredth anniversary of the year of Maximilian’s death, the Metropolitan Museum of Art in New York will host The Last Knight: The Art, Armor, and Ambition of Maximilian I. Featuring more than 180 objects selected from some thirty public and private collections in Europe, the United States, and elsewhere—including weapons, paintings, sculpture, prints, drawings, stained glass, tapestry, and even toys—it is billed as the most comprehensive loan exhibition of European arms and armor in decades,” as ANTIQUES reported last year. metmuseum.org

Michelangelo: Mind of the Master at the Cleveland Museum of Art, to January 5, 2020

Two dozen original drawings – including a group from the Teylers Museum shown in the United States for the first time – shed ever more light on Michelangelo’s masterful renderings of the human form. Touchable reproductions are also included, giving a more tactile opportunity to appreciate the works. clevelandart.org

Rauschenberg in Charleston at the Gibbes Museum of Art, to January 5, 2020

A selection of Rauschenbeg’s photographs of Charleston – from 1952 to 1981 – are displayed alongside several later works in which they appear. As one of Rauschenberg’s earliest subjects, Charleston offers a view into one of the artist’s lifelong inspirations. gibbesmuseum.org

Victorian Radicals: From the Pre-Raphaelites to the Arts and Crafts Movement at the San Antonio Museum of Art, to January 5, 2020

In their quest to safeguard beauty in a world of smoking factories, the artists in this show fought many dragons: from issues of class and gender to the loss of handicraft to industrialization. Featured artists include Ford Madox Brown, Edward Burne-Jones, William Holman Hunt, William Morris, and Dante Gabriel Rossetti. Many works on view have never been shown outside of Britain prior to this presentation. samuseum.org

Nearly one thousand national and international dealers will be present for this expansive show – featuring fine art, American and European silver, jewelry, furniture and more, with offerings from the Renaissance to Art Deco eras. originalmiamibeachantiqueshow.com